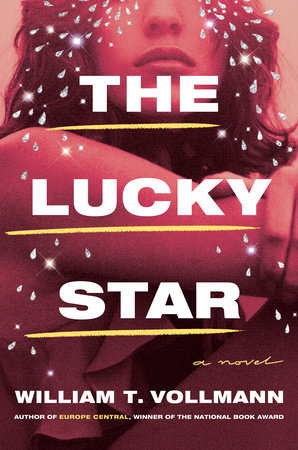 In such earlier works of fiction as The Rainbow Stories and The Royal Family, William T. Vollmann wrote of pimps, prostitutes, addicts and homeless dreamers in San Francisco’s Tenderloin district. In this new novel, Vollmann returns there with a story that centers around a woman with magical powers whom everyone loves, and who has to love them all back.

After being initiated into a coven of island witches, Neva begins to fulfill her fate in a Tenderloin dive bar. Her worshippers include Richard, the introverted, alcoholic, occasionally omniscient narrator; a profane, aggressive transgender sex worker named Shantelle; the brisk but motherly barmaid Francine; and the former Frank, who has renamed herself after her idol Judy Garland. When Judy starts to love Neva too much, Judy’s retired policeman boyfriend embarks on a mission of exposure and destruction.

Crafted out of language by turns spiritual and sexually graphic, The Lucky Star aches with compassion as it explores celebrity culture, gender identity, incest, Christian sacrifice and, most of all, the quotidian and sometimes faltering heroism of marginalized people who in the face of humiliation and outright violence seek to love in their own way, and stand up for who they are.

Praise from The Lucky Star

“[A] provocatively playful novel . . . As Neva evolves from an innocent to an icon on par with Marlene Dietrich, at least in the eyes of the Y Bar circle, she guides and mentors their sexual self-discovery, helping define their boundaries and gain confidence . . . Vollmann’s challenging novel is full of memorable moments.” —Publishers Weekly

William T Vollmann is an award winning novelist, journalist, war correspondent, short story writer, essayist, and painter. He is the author of ten novels, four short story collections, nine works of non-fiction, and numerous limited special editions. His novel Europe Central won the 2005 National Book Award. He has won numerous honors for his work including the Whiting Foundation Award and the Shiva Naipaul Memorial Award for his fiction.