Will Alexander in conversation with Tongo Eisen-Martin 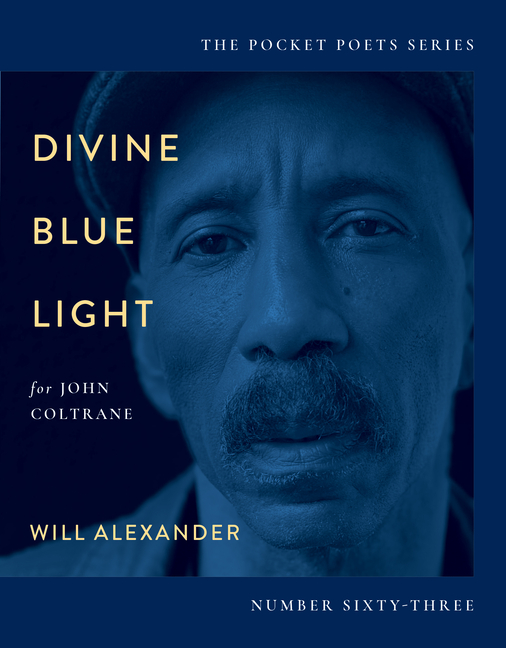 From Will Alexander, finalist for the 2022 Pulitzer Prize in Poetry, a new collection of poems from the intersection between surrealism and afro-futurism, where Césaire meets Sun Ra. Divine Blue Light further affirms Alexander’s status as one of the most unique and innovative voices in contemporary poetry.

One of Publishers Weekly’s Top 10 Notable Poetry Books for Fall 2022!

purchase copies of Divine Blue Light at this link.

Against the ruins of a contemporary globalist discourse, which he denounces as a “lingual theocracy of super-imposed rationality,” Will Alexander’s poems constitute an alternative cartography that draws upon omnivorous reading–in subjects from biology to astronomy to history to philosophy–amalgamating their diverse vocabularies into an impossible instrument only he can play. Divine Blue Light is anchored by three major works: the opening “Condoned to Disappearance,” a meditation on the heteronymic exploits of Portuguese modernist Fernando Pessoa; the closing “Imprecation as Mirage,” a poem channeling an Indonesian man; and the title poem, an anthemic ode to the jazz saxophonist John Coltrane. Other key pieces include “Accessing Gertrude Bell,” a critique of one of the designers of the modern state of Iraq; “Deficits: Chaïm Soutine & Joan Miró,” in homage to two Jewish artists forced to flee the Nazi invasion of France; and “According to Stellar Scale,” a compact lyric that traveled to space with astronaut Sian Proctor. The newest installment in our Pocket Poets Series, Divine Blue Light confirms Alexander’s status among the foremost surrealists writing in English today.

Born in 1948 in Los Angeles, Will Alexander is a poet, novelist, playwright, philosopher, visual artist, and musician. He has published over two dozen books in a variety of genres and has earned many honors and awards including a Whiting Fellowship for Poetry, a California Arts Council Fellowship, the PEN/Oakland Josephine Miles Award, a Before Columbus Foundation American Book Award, and the 2016 Jackson Poetry Prize. He has also exhibited his artwork in group and solo shows. His work is known for its visionary, oracular surrealism and the influence of Negritude. Among his publications are Refractive Africa (New Directions, 2021/Granta, 2022), which was a finalist for the 2022 Pulitzer Prize in Poetry, The Combustion Cycle (Roof, 2021), Across the Vapor Gulf (New Directions, 2017), and The Sri Lankan Loxodrome (New Directions, 2009). His book Compression & Purity (2011) was volume five in the City Lights Spotlight Poetry Series. He is currently the poet-in-residence at Beyond Baroque in Venice, California. He has lived his entire life in Los Angeles.

Tongo Eisen-Martin is the Poet Laureate of San Francisco, California. He is the author of Heaven Is All Goodbyes (City Lights Books, 2017), which was shortlisted for the Griffin International Poetry Prize, received the California Book Award for Poetry, an American Book Award, and a PEN Oakland Book Award. He is also the author of someone’s dead already (Bootstrap Press, 2015). Blood on the Fog, his newest collection of poems, was published as volume 62 in the City Lights Pocket Poets Series in September 2021.

“These surrealist and Afrofuturist poems examine politics, globalism, and the powers and limitations of language, while paying tribute to artists forced to flee the Nazi invasion of France.”–Maya Popa, Publishers Weekly

“The ‘invisible current’ Will Alexander channels in the meteoric poems of Divine Blue Light is not surreal escape but vibrational engagement–an engagement with the infinite streams of the heart of being.”–Jeffrey Yang, author of Line and Light

“Like agua tilting itself into a god, Will’s texts suffuse the horizon of Poetry with the abstract purity of their oceanic movements, sun-condensing, dissolving seemingly endless sight into a disappearing instant of the Miraculous. Divine Blue Light exists by what it exudes.”–Carlos Lara, author of Like Bismuth When I Enter

Julian Aguon in conversation with Rebecca Solnit celebrating the publication of No Country for Eight-Spot Butterflies: A Lyric Essay by Julian Aguon published by Astra Publishing A collection of essays […]

“The Waste Land” by T.S. Eliot, published in 1922, is widely regarded as one of the most influential, powerful— and at times  one of the most controversial—modernist poems of the […]

City Lights honors one of the most exciting new indy presses to emerge in the Bay Area in recent times. Nomadic Press publishes the works of emerging and established writers […]

City Lights celebrates the launch for the publication of Comrade Sisters: Women of the Black Panther Party Photographs by Stephen Shames , Text by Ericka Huggins published by ACC Art Books […]

Tayi Tibble in conversation with Tommy Orange (with an opening statement by John Freeman) City Lights celebrates the publication of Poukahangatus: poems By Tayi Tibble published by Alfred Knopf This […]

Ousmane K. Power-Greene reading from The Confessions of Matthew Strong: A Novel published by The Other Press A wildly original, incendiary story about race, redemption, the dangerous imbalances that continue […]