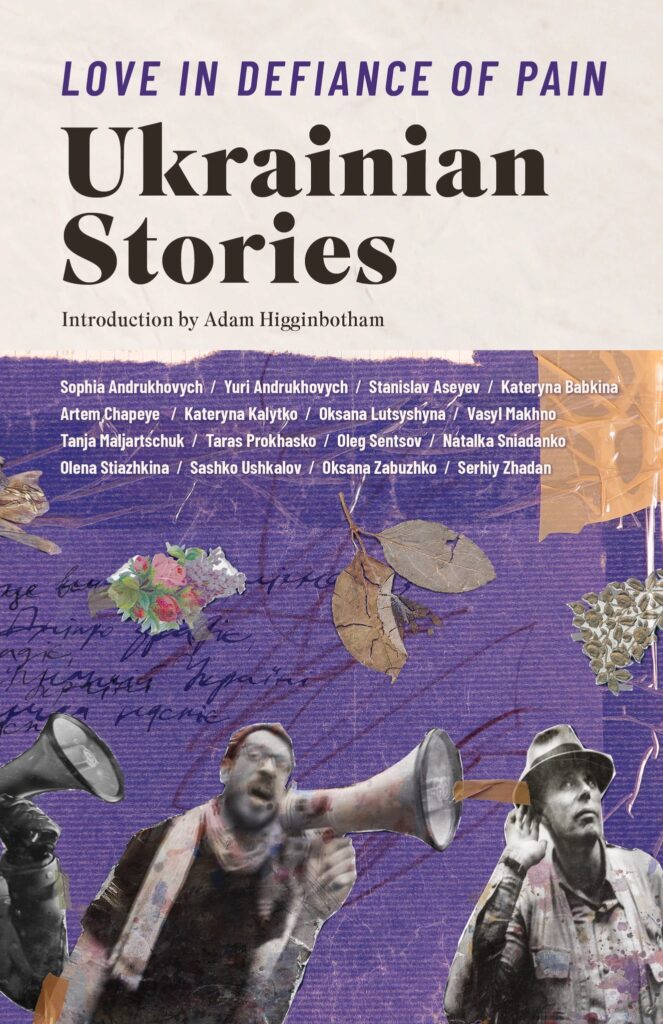 celebrating the publication of

While Ukraine is under sustained attack, many in the West have marveled at the nation’s strength in the face of a barbaric invasion. Who are these people, what is this nation, which has captivated the world with their courage? By showcasing some of the finest Ukrainian writers working today, this book aims to help answer that question.
There are war stories, but there are also love stories. Stories of aging romantics in modern Ukraine, and of modern Ukrainians in Vienna and Brooklyn, a fantastical tale set on a mysterious island where people never die, a wild lovers’ romp through modern-day Ukraine, a sobering account of an American war photographer,  and a post-modern tale of a botanist in love. Some of these stories have been published before—indeed, many are award-winning and acclaimed—while some are appearing for the first time, making their rightful debut on the world stage. The range of voices, settings, and subjects in this vivid and varied collection show us how to “love in defiance of pain”—an apt phrase taken from the very first story in this book. Readers will be delighted and moved, and will gain insight into the proud history and contemporary life of Ukraine.
Authors include:
Sophia Andrukhovych, Yuri Andrukhovych, Stanislav Aseyev, Kateryna Babkina, Artem Chapeye, Liubko Deresh, Kateryna Kalytko, Oksana Lutsyshyna, Vasyl Makhno, Tanja Maljartschuk, Taras Prokhasko, Oleg Sentsov, Natalka Sniadanko, Olena Stiazhkina, Sashko Ushkalov, Oksana Zabuzhko, and Serhiy Zhadan

Proceeds from the sale of this collection will be donated to humanitarian efforts in Ukraine.

Ali Kinsella has been translating from the Ukrainian for eight years. Her published works include essays, poetry, monographs, and subtitles to various films. She holds an MA from Columbia University, where she wrote a thesis on the intersection of feminism and nationalism in small states. A former Peace Corps volunteer, Ali lived in Ukraine for nearly five years. She is currently in Chicago, where she also sometimes works as a baker.

Zenia Topkins, an American of Ukrainian descent, began translating Ukrainian literature in 2015, after fifteen years’ experience in education, academia, and the private sector. She holds graduate degrees in Middle Eastern Languages and Literatures from Columbia University and Islamic Studies from the University of Virginia. A past recipient of fellowships from the U.S. Department of State, the U.S. Department of Education, and the National Endowment for the Humanities, among others, Zenia has varying levels of proficiency in nine languages. Her translations have been supported by grants from the Ukrainian Book Institute, the House of Europe, and the Peterson Literary Fund, among others, and include Tanja Maljartschuk’s A Biography of a Chance Miracle, Olesya Yaremchuk’s Our Others: Stories of Ukrainian Diversity, Vakhtang Kipiani’s WWII, Uncontrived and Unredacted: Testimonies from Ukraine, and Oleksandr Shatokin’s The Happiest Lion Cub (forthcoming). She lives in exurban Virginia with her husband and three kiddos. Zenia is currently translating books by Stanislav Aseyev, Oleksandr Mykhed, and Tanja Maljartschuk, scheduled for publication in late 2022 and early 2023. She has served as the lead English translator for The Old Lion Publishing House, Ukraine’s premier literary press, since 2019.