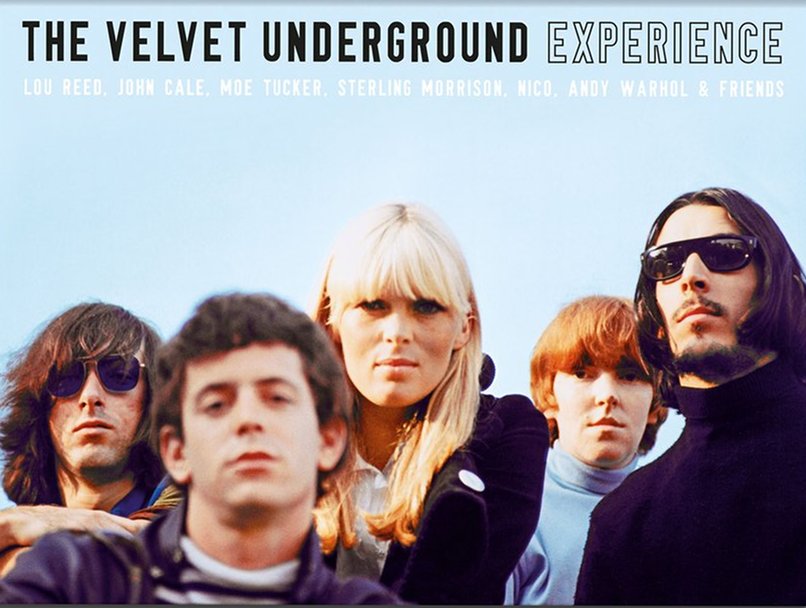 Edited by JC Gabel and Margot Ross and

My Week Beats Your Year: Encounters with Lou Reed

Edited and with texts by Pat Thomas, Compiled by Michael Heath

About The Velvet Underground Experience:

At the heart of 1960s avant-garde New York was the convergence of Lou Reed, John Cale, Sterling Morrison, and Moe Tucker, heralding an unprecedented musical revolution. The Velvet Underground was a unique group for its time, fueled by the visual arts, poetry, and stage performance, as much by ideas of sexual transgression and the subversion of social norms.

Compiled from archival ephemera, unpublished photographs, films, album covers, posters, fanzines, letters, testimonies, and poems, this monograph gathers anew the Velvet Underground Experience exhibition that opened in Paris in 2016 for a US audience, recreating the sound, visual, and emotional experiences of the underground scenes in New York, where extravagances were always allowed.

This updated monograph explores the genesis and history of a group that, despite its colorful collaboration with Andy Warhol, was overlooked by success during its brief existence (1965-1970). Too radical, too transgressive, and too uninhibited for their time, the Velvet Underground has become a cultural phenomenon over the decades, one that continues to fascinate audiences around the world.

About My Week Beats Your Year: Encounters with Lou Reed:

During his first major sit-down with the music press in 1977, between claiming all his songs were about guilt and revenge, Elvis Costello casually remarked, “I don’t really listen to Lou Reed’s records, but I never miss an interview with him.”

Indeed, for all his publicly expressed loathing of the press in general and music journalists in particular, during his long career as a rock artist, Lou Reed was never less than entertaining in his dealings with the Fourth Estate. In fact, one could go so far as to claim that, for Lou, the press became as much an implement of expression as singing, composing, and playing music. In a style at times very much informed by his mentor Andy Warhol, Reed could play the media like a Marshall-amped Stradivarius.

To the majority of his fans, the apotheosis of Reed’s relationship with the press, and most prominently regarded to this day, was the series of combative tête-à-têtes between Lou and the late great music journalist Lester Bangs, published in CREEM Magazine during the 1970s.

My Week Beats Your Year: Encounters with Lou Reed features 30+ interviews spanning his solo career, from the golden era of print rock-journalism, to the first online blogs. The compilation is one fan’s humble attempt to move beyond the Bangs canon, and delve deeper into the distance and intimacy, cactus and mercury, that constituted Lou’s post-Velvet Underground public media image.

This anthology will be an intimate portrait of Reed who, in addition to being notoriously prickly (to put it mildly), was also intelligent, articulate, and deeply passionate about what was important to him, both as a person and as a creative artist.

Hat & Beard is an independent, Los Angeles-based publisher and print production house. With their book imprint, Hat & Beard Press, they create original, illustrated nonfiction books of pop-cultural and historical significance that draw on existing cult audiences.  As a production house, via Hat & Beard Projects, they produce artist monographs in conjunction with art galleries, museums, nonprofits, and artists themselves. They also champion the redesign and reissue of classic visual culture titles worth a second look. Hat & Beard Films works as the motion picture production arm of the company.

Founded in 2011, San Francisco’s Rock ‘n Roll Book Club is a loose group of regulars and non-regulars who enjoy music and reading about it. They generally meet every other month at a bar’s backroom to discuss a book and listen to related music, over drinks and sometimes food mentioned in the book. They read new releases, classic memoirs, biographies, oral histories and music criticism, usually focusing on music from the 60s and 70s, preferably including sex, drugs, and good writing. They’ve met with authors Alice Bag (via skype), Robert Gordon (via Skype), Pauline Butcher (via Skype), John Einarson (via Skype), Evelyn McDonnell (via Skype), and Greil Marcus and V. Vale (RE/Search). To learn more visit: The Rock & Roll Book Club