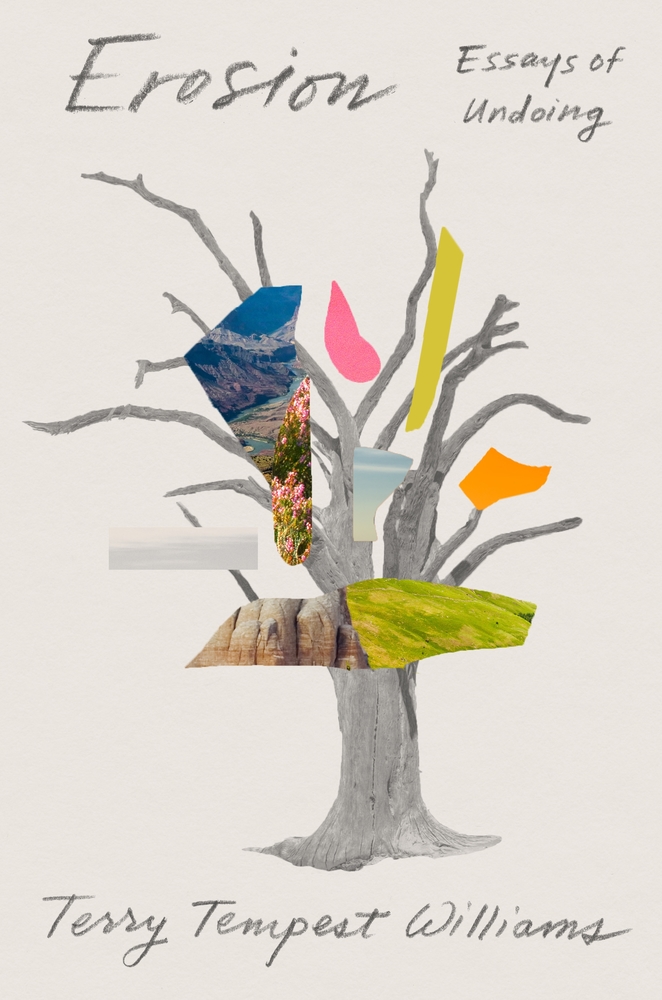 reading from her new book

Fierce, timely, and unsettling essays from an important and beloved writer and conservationist

Terry Tempest Williams is one of our most impassioned defenders of public lands. A naturalist, fervent activist, and stirring writer, she has spoken to us and for us in books like The Hour of Land: A Personal Topography of America’s National Parks and Refuge: An Unnatural History of Family and Place. In these new essays, Williams explores the concept of erosion: of the land, of the self, of belief, of fear. She wrangles with the paradox of desert lands and the truth of erosion: What is weathered, worn, and whittled away through wind, water, and time is as powerful as what remains. Our undoing is also our becoming.

She looks at the current state of American politics: the dire social and environmental implications of recent choices to gut Bears Ears National Monument, sacred lands to Native People of the American Southwest, and undermine the Endangered Species Act. She testifies that climate change is not an abstraction, citing the drought outside her door and at times, within herself. Images of extraction and contamination haunt her: “oil rigs lighting up the horizon; trucks hauling nuclear waste on dirt roads now crisscrossing the desert like an exposed nervous system.” But beautiful moments of relief and refuge, solace and spirituality come—in her conversations with Navajo elders, art, and, always, in the land itself. She asks, urgently: “Is Earth not enough? Can the desert be a prayer?”

Terry Tempest Williams is the award-winning author of The Hour of Land: A Personal Topography of America’s National Parks; Refuge: An Unnatural History of Family and Place; Finding Beauty in a Broken World; and When Women Were Birds, among other books. Her work is widely taught and anthologized around the world. A member of the American Academy of Arts and Letters, she is currently the Writer-in-Residence at the Harvard Divinity School. She and her husband Brooke Williams divide their time between Cambridge, Massachusetts and Castle Valley, Utah.

What has been said about the work of Terry Tempest Williams

“An apostle of life and earth and a soul-revving teller of true stories, Williams (The Hour of Land, 2016) brings lyricism, candor, mystery, and factual exactitude to the deeply affecting essays collected here . . . Williams’ exquisite testimony of wonder and wisdom is vitalizing and crucial.”
—Booklist, starred review

“In a collection of passionate, galvanizing essays, activist and teacher Williams shares her intimate connection to the as-yet untamed landscapes of the American West . . . Williams writes with a poetic optimism . . . Stirring.”
—Publishers Weekly, starred review

“These essays are a joy to read. Terry Tempest Williams is a wise and fierce defender of the wild Earth.”
—Leslie Marmon Silko, author of The Turquoise Ledge

“Terry Tempest Williams’s voice in the clamor is like a hot desert wind blowing away the litter in a crowded room and leaving behind only what has weight, what is essential. These are essays about the courage to face what is most brutal and monstrous, by finding what is most beautiful and merciful.”
—Rebecca Solnit, author of Call Them by Their True Names

“Luminous, fearless, brutally honest. But with this latest book, Williams takes her spiritual love of the American West—along with her grief, anger and exasperation at what we continue to do to this place—to a new level. If John Muir ever wrote like this, most of the West would be in wilderness protection by now. As well, she knows her way to the human heart.”
—Timothy Egan, author of The Immortal Irishman

“Terry Tempest Williams has rewritten the rules for the way we must engage the natural world and each other. Erosion is both a shout from the edge of what we were and a beckoning to what we must become. Pick up your courage and this book; be prepared to take notes—and action.”
—Alexandra Fuller, author of Quiet Until the Thaw

“Terry Tempest Williams is our great activist laureate. Working out of the lineage of Dickinson, O’Keeffe, D. H. Lawrence, and, later, Abbey and Peacock, she is nonetheless singular and extraordinarily original. She is rooted as juniper yet ephemeral as a sand dune. The forces that have eroded her are rapture and grief. What remains is elemental beauty.”
—Rick Bass, author of For a Little While

“These are the most dangerous of all days for humans on Earth, and Erosion is the book for our time. Writing on the edge of the sacred, Terry Tempest Williams’s message bears the power and emotional gifts of a close call with a charging grizzly. There are no stray words. Terry writes with a purity glimpsed in certain outcrops of crystalline rock or the waters filling a chain of alpine lakes. I believe there is no more important writer working today.”
—Doug Peacock, author of In the Shadow of the Sabertooth