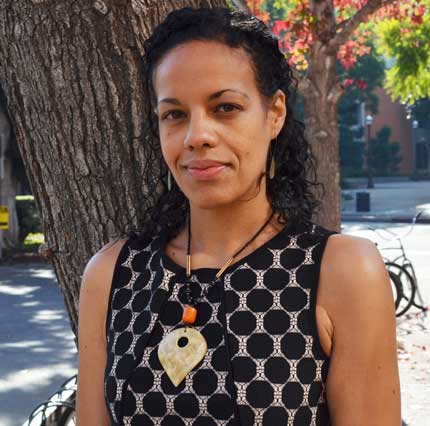 Shana Redmond discussing the subject of her new book

Everything Man: The Form and Function of Paul Robeson

From his cavernous voice and unparalleled artistry to his fearless struggle for human rights, Paul Robeson was one of the twentieth century’s greatest icons and polymaths. In Everything Man Shana L. Redmond traces Robeson’s continuing cultural resonances in popular culture and politics. She follows his appearance throughout the twentieth century in the forms of sonic and visual vibration and holography; theater, art, and play; and the physical environment. Redmond thereby creates an imaginative cartography in which Robeson remains present and accountable to all those he inspired and defended. With her bold and unique theorization of antiphonal life, Redmond charts the possibility of continued communication, care, and collectivity with those who are dead but never gone.

Shana L. Redmond is Professor of Musicology and African American Studies at the University of California, Los Angeles. She is coeditor of Critical Ethnic Studies: A Reader, also published by Duke University Press, and author of Anthem: Social Movements and the Sound of Solidarity in the African Diaspora.

Praise for Everything Man

“Formally challenging and beautifully conceived, Everything Man is a model for scholarship and thinking as well as a powerful addition to the body of work on Paul Robeson, freedom movements, sound studies, music, and beyond. It will make a tremendous impact.” — Christina Sharpe, author of In the Wake

“Shana Redmond’s ingenious reframing of Paul Robeson as Afrofuturist media artist is but one quality marking Everything Man as a milestone contribution to Robeson scholarship. Redmond compels readers to reconsider Robeson as a radical modernist—one whose innovative embrace of electronic media technology (film, sound recording, telegraph) transforms our understanding of him from remote Black Communist icon to protean, creative contemporary. In lucid and evocative prose Redmond narrates how Robeson democratized sonic and visual modernity while engaged in anticapitalist justice work. Redmond illuminates the afterlife of Robeson’s voice and presence too—his appearances in postmodern art practices and the many places Robeson’s footpaths took Redmond where she discovered he was still revered by the far-flung descendants of the man’s midcentury comrades and congregants.” — Greg Tate, author of Flyboy 2