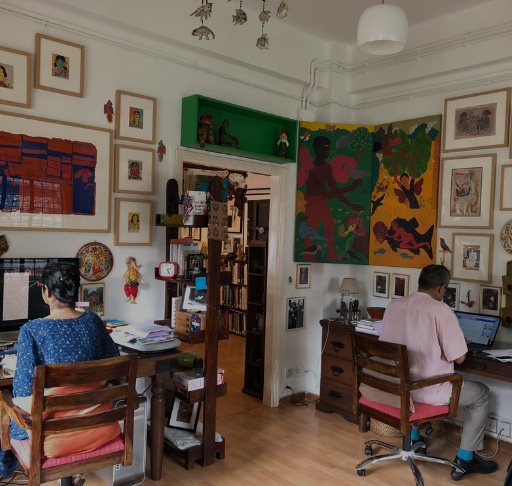 Hosted by Peter Maravelis and Paul Yamazaki of City Lights

Seagull Books was founded by Naveen Kishore in 1982 as an independent Indian publishing house specializing in serious books on art, theatre and cinema. It published plays by major Indian playwrights, monographs and essays by leading Indian artists, filmscripts from the best-known Indian and European filmmakers, along with academic titles on culture, society and the various arts.

In 2012, Seagull author Mo Yan was awarded the Nobel Prize in Literature while in 2015, Laszlo Krasznahorkai, another Seagull author, received the prestigious Man Booker International Prize. Maryse Condé, whose three volumes Seagull has published in English translation, won the alternative Nobel Prize in 2018.

Nancy Naomi Carlson is a poet, translator and editor based in Maryland. She received a grant from the National Endowment for the Arts to translate Abdourahman A. Waberi’s The Nomads, My Brothers, Go Out to Drink from the Big Dipper, which, published by Seagull Books, was a finalist for the Best Translated Book Award USA (2016). She is the author of the poetry collection An Infusion of Violets, also available from Seagull Books.

Naveen Kishore is the founder and director of the Seagull Foundation for the Arts, a not for profit charitable trust which administers Seagull Books, Peaceworks, Seagull School of Publishing, and the Seagull Arts and Media Resource Centre. The Resource Centre possesses vast arts, film, and music libraries and engages in a wide array of activities that include theater, dance, recitals, photography exhibitions, and workshops. Mr. Kilshore has a background in theater and is an acclaimed photographer. He was recently awarded the Ottoway Prize for the Promotion of Translated Literature.

Alain Mabanckou is considered one of francophone Africa’s most prolific contemporary writers. Born in what is now called Congo-Brazzaville, Mabanckou has won several awards, including the prestigious Grand Prix de la Littérature from the Académie Française. Twice a finalist for the Man Booker International Prize, he is a professor at the University of California–Los Angeles. Seagull Books has published his poetry collection As Long As Trees Take Root In The Earth.