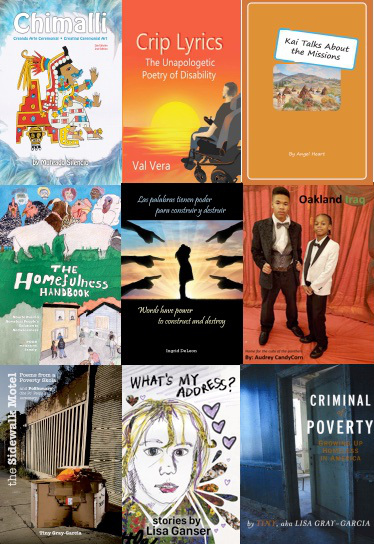 POOR PRESS/Prensa Pobre is a poor people-led/indigenous people-led, grassroots non-profit arts organization dedicated to providing revolutionary media access, art, education and advocacy to silenced youth, adults and elders in poverty across the globe. All of POOR’s programs are focused on providing non-colonizing, community-based and community-led media, art and education with the goals of creating access for silenced voices, preserving and degentrifying rooted communities of color and re-framing the debate on poverty, landlessness, indigenous resistance, disability and race locally and globally.

City Lights is celebrating the release of the following books:

*Crip Lyrics: The Unapologetic Poetry of Disability by Val Vera
*The Sidewalk Motel: Poems from a Poverty Skola & PoShunary by Tiny Gray-Garcia
*Kai Talks about the Missions by Angel Heart
*What’s My Address? by Lisa Ganser
*Chimalli by Muteado Silencio
*Las palabras tienen poder para construir y destruir/Words have power to construct and destroy by Ingrid DeLeon
*Oakland Iraq by Audrey CandyCorn
*The Homefulness Handbook: How to build a homeless peoples solution to homelessness by POOR Magazine Family

About our hosts and readers:

Tiny (aka Lisa Gray-Garcia) is a formerly unhoused, incarcerated poverty scholar, revolutionary journalist, lecturer, poet, visionary, teacher and the co–founder of POOR Magazine/Prensa POBRE/PoorNewsNetwork. She is also the author of Criminal of Poverty: Growing Up Homeless in America, co-editor of A Decolonizers Guide to A Humble Revolution, Born & Raised in Frisco, and Poverty ScholarShip: Poor People Theory, Arts, Words and Tears Across Mama Earth, A PeoplesTeXt which was released in 2019. In 2011 she co-launched The Homefulness Project – a landless peoples, self-determined land liberation movement in the Ohlone/Lisjan/Huchuin territory known as Deep East Oakland, and co-founded a liberation school for children, Deecolonize Academy.

Tongo Eisen-Martin is the Poet Laureate of San Francisco, California. He is the author of Blood on the Fog: No. 62 of the Pocket Poets Series (City Lights Books, 2021) and Heaven Is All Goodbyes (City Lights Books, 2017), which was shortlisted for the Griffin International Poetry Prize, received the California Book Award for Poetry, an American Book Award, and a PEN Oakland Book Award. He is also the author of someone’s dead already (Bootstrap Press, 2015). Blood on the Fog, a new collection of poems, is forthcoming from City Lights Publishers in September, 2021.

Audrey CandyCorn is a writer from Oakland.

Ingrid de leon is the mother of 4 children and grandmother of 2 grandchildren. She is from Guatemala. The daughter of David de leon and of natividad chun, she was raised in countryside and born in poverty. A courageous survivor of abuse and violence, she has committed her story to the written word.

Lisa Ganser is a white, Queer, bipolar, brain injured, Non Binary, formerly UNhoused Poverty Scholar, organizer and artist who tends to Squaxin and Nisqually Land. They currently live & love in so-called Olympia, WA with their partner, Nomy Lamm. They are a copwatcher, a dog walker, a sidewalk chalker and the daughter of a Momma named Sam.

Angel Heart, Quechua-Puna, is the former Secretary and Public Relations Officer for Sacred Sites Protection and Rights of Indigenous Tribes. She was with the Vallejo, CA-based organization from 2013 – 2020. Angel Heart led and assisted in the removal of 6 Native American mascots in Solano, Contra Costa, and Napa County public schools. She currently works with POOR Magazine/Homefulness in Huichin/Oakland, CA. Angel Heart was honored at the 2019 Vallejo Pow-Wow for her contributions to First Nations Communities. She is a United States Army Veteran, with an honorable discharge, and Grandmother of 4.

Muteado Silencio was born in Lázaro Cardenas, Michoacán, Mexico – a place of fishermen of the P’urepecha people. Their parents are Roselia Jaramillo and Artemio Soberanis.
Muteado is a poet, poverty skolar, writer, painter, and dancer of the Chintontequisa, MItoteliztli, Aztec Dance.

Val Vera is a Disability Justice activist, speaker, organizer and writer. Originally from Chicago, Val began his Disability Justice career in San Diego and has served on several boards focused on disability culture and equity. His intersectional experience as a Disabled Latinx, coupled with his Disability Justice work, is revealed by the imagery and passion in his writing.Val currently lives in Denton, TX where he organizes, educates and serves with the local Disability Community. He is an avid moviegoer, music lover and sports aficionado. Above all, Val enjoys laughing and spending unscripted time with his favorite person Michelle.