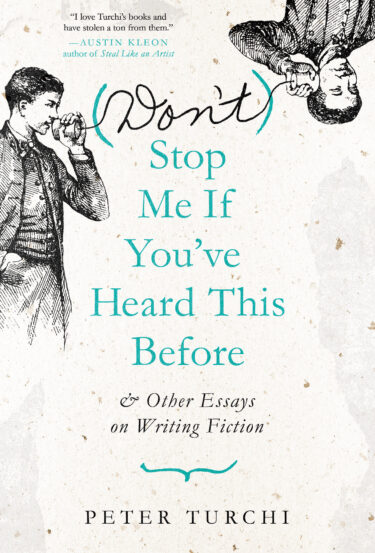 celebrating the publication of

Peter Turchi’s third book on the craft of fiction goes beyond the basics to explore the intricate mechanics of storytelling.

In (Don’t) Stop Me If You’ve Heard This Before, Peter Turchi combines personal narrative and close reading of a wide range of stories and novels to reveal how writers create the fiction that matters to us. Building on his much-loved Maps of the Imagination: The Writer as Cartographer, Turchi leads readers and writers to an understanding of how the intricate mechanics of storytelling—including shifts in characters’ authority, the subtle manipulation of images, careful attention to point of view, the strategic release of information, and even digressing from the (apparent) story—can create powerful effects.

While these essays draw from decades of teaching undergraduate and graduate students, they also speak to writers working on their own. In “Out of the Workshop, into the Laboratory,” Turchi discusses how anyone can make the most of discussions of stories or novels in progress, and in “Reading Like a Writer” he provides guidelines for learning from writing you admire. Perhaps best of all, these essays by a writer the Houston Chronicle has called “one of the country’s foremost thinkers on the art of writing” are as entertaining as they are edifying, always reminding us of the power and pleasure of storytelling.

Peter Turchi has written and coedited several books on writing fiction, including Maps of the Imagination: The Writer as Cartographer, A Muse and a Maze: Writing as Puzzle, Mystery, and Magic, A Kite in the Wind: Fiction Writers on Their Craft, and (Don’t) Stop Me if You’ve Heard This Before and Other Essays on Writing Fiction. His stories have appeared in Ploughshares, Story, the Alaska Quarterly Review, Puerto del Sol, and the Colorado Review, among other journals. He has received numerous accolades, including fellowships from the National Endowment for the Arts and the John Simon Guggenheim Memorial Foundation. He is a professor of creative writing at the University of Houston.

Austin Kleon is a New York Times bestselling author. His books include Steal Like an Artist; Show Your Work!; Keep Going; Steal Like An Artist Journal; and Newspaper Blackout. His works focus on creativity in today’s world. He has spoken at organizations such as Pixar, Google, and TEDx, and at conferences such as The Economist’s Human Potential Summit and SXSW.

This event was made possible by support from the City Lights Foundation. To learn more visit: https://citylights.com/foundation/