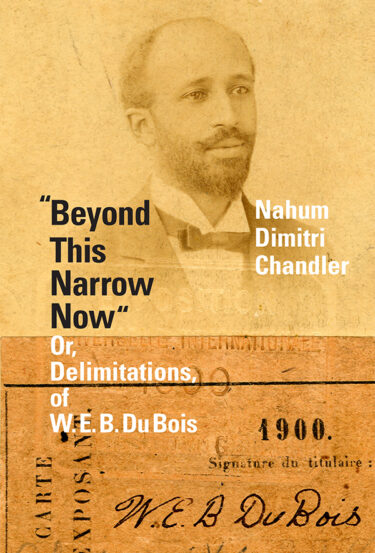 “Beyond This Narrow Now” Or, Delimitations, of W. E. B. Du Bois

In “Beyond This Narrow Now” Nahum Dimitri Chandler shows that the premises of W. E. B. Du Bois’s thinking at the turn of the twentieth century stand as fundamental references for the whole itinerary of his thought. Opening with a distinct approach to the legacy of Du Bois, Chandler proceeds through a series of close readings of Du Bois’s early essays, previously unpublished or seldom studied, with discrete annotations of The Souls of Black Folk: Essays and Sketches of 1903, elucidating and elaborating basic epistemological terms of his thought. With theoretical attention to how the African American stands as an example of possibility for Du Bois and renders problematic traditional ontological thought, Chandler also proposes that Du Bois’s most well-known phrase—“the problem of the color line”—sustains more conceptual depth than has yet been understood, with pertinence for our accounts of modern systems of enslavement and imperial colonialism and the incipient moments of modern capitalization. Chandler’s work exemplifies a more profound engagement with Du Bois, demonstrating that he must be re-read, appreciated, and studied anew as a philosophical writer and thinker contemporary to our time.

Nahum Dimitri Chandler is Professor in the School of Humanities at the University of California, Irvine, author of X: The Problem of the Negro as a Problem for Thought and editor of The Problem of the Color Line at the Turn of the Twentieth Century: The Essential Early Essays by W. E. B. Du Bois.

Judith Butler is a philosopher and gender theorist whose work has influenced political philosophy, ethics, and the fields of third-wave feminism, queer theory, and literary theory. In 1993, Butler began teaching at the University of California, Berkeley, where they have served, beginning in 1998, as the Maxine Elliot Professor in the Department of Comparative Literature and the Program of Critical Theory. They are also the Hannah Arendt Chair at the European Graduate School. Judith Butler is the author of numerous books. These include: Gender Trouble: Feminism and the Subversion of Identity (1990) and Bodies That Matter: On the Discursive Limits of Sex (1993). Their most recent book is The Force of Non-Violence from Verso Press.

Robert Gooding-Williams is the M. Moran Weston/Black Alumni Council Professor of African-American Studies and Professor of Philosophy and of African American and African Diaspora Studies at Columbia University, where he is the Director of the Center for Race, Philosophy, and Social Justice. He is currently at work on two projects, a book on Du Bois’s political aesthetics and a study of the political thought of Martin Delany. Gooding-Williams was elected to the American Academy of Arts and Sciences in 2018.