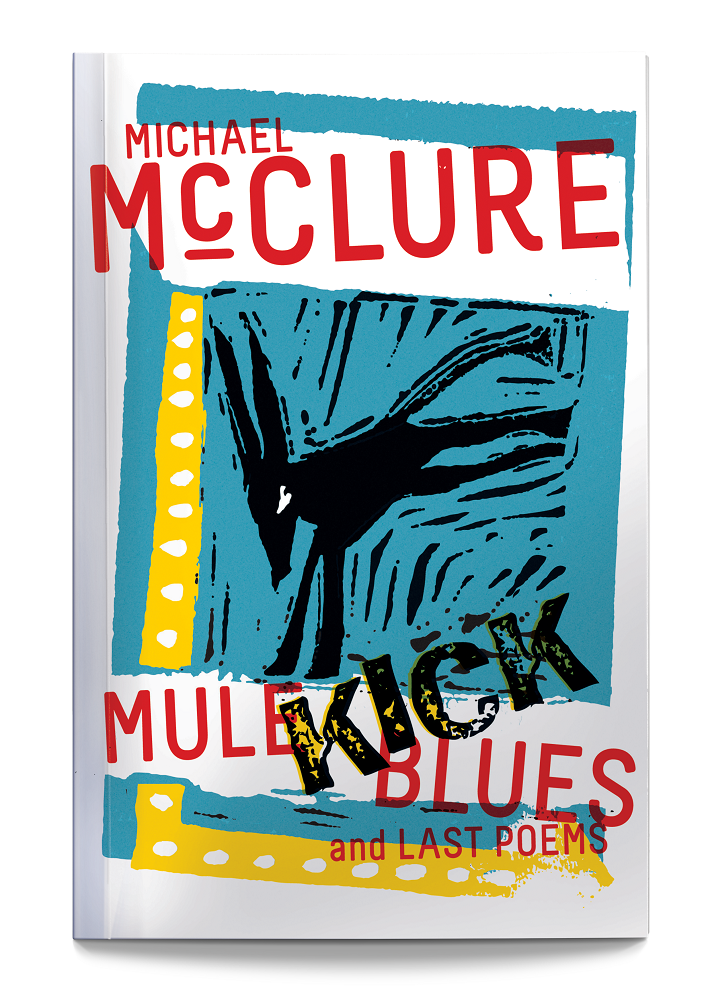 This event is followed by a livestreamed tribute to the life of Michael McClure with a roster of special guests happening on Sunday, May 9th. Go here to register for that event too!

The final book of poems from a Beat Generation legend, Mule Kick Blues finds McClure restlessly innovating until the end.

Mule Kick Blues is the final book of poems by Beat Generation legend Michael McClure. A powerful collection of new work written during the last years of McClure’s life, Mule Kick Blues was readied for publication before the poet’s death in May 2020. Its opening section gives us a rare view into his thoughts about his own mortality, particularly in the moving sequence “Death Poems.” The book takes its title from an innovative series of homages to blues musicians like Leadbelly and Howlin’ Wolf, and evoking Kerouac’s concept of “blues” poems. Featuring shout-outs to lifelong friends like Philip Whalen, Diane di Prima, and Gary Snyder, the long poem “Fragments of Narcissus,” and the eco-logical and zen-infused themes for which he is known, Mule Kick Blues is a definitive statement by one of the most significant American poets of the last sixty years. Introduction by poet Garrett Caples, McClure’s editor at City Lights.

Eileen Myles is an acclaimed poet and writer who has published over twenty works of fiction, poetry, nonfiction, and libretto. Their prizes and awards include a Guggenheim Fellowship, a Warhol/Creative Capital grant, an award from the American Academy of Arts and Letters, and a poetry award from the Foundation for Contemporary Arts.

Anne Waldman co-founded the Jack Kerouac School of Disembodied Poetics at the Naropa Institute in Boulder, Colorado, where she still teaches. Her poetry collections include Iovis I, Iovis II, Fast Speaking Woman, Helping the Dreamer, Kill or Cure, and Trickster Feminism. She is a recipient of the Shelley Memorial Award.

Garrett Caples is a poet and freelance writer who lives in San Francisco and is an editor for City Lights, where he curates the Spotlight Poetry Series. He is the author of three full-length poetry collections and a book of essays. He is the co-editor of The Collected Poems of Philip Lamantia (California, 2013), Particulars of Place (Omnidawn, 2015) by Richard O. Moore, Incidents of Travel in Poetry: New and Selected Poems by Frank Lima (City Lights, 2016), and Arcana: A Stephen Jonas Reader (City Lights, 2019) He has a Ph.D. in English from UC Berkeley.