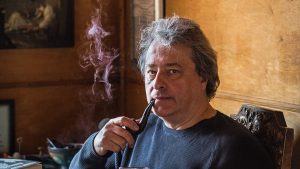 Reading excerpts from the new translation of his short fiction collection

Rock, Paper, Scissors and other stories

Maxim Osipov, who lives and practices medicine in a town ninety miles outside Moscow, is one of Russia’s best contemporary writers. In the tradition of Anton Chekhov and William Carlos Williams, he draws on his experiences in medicine to write stories of great subtlety and striking insight. Osipov’s fiction presents a nuanced, collage-like portrait of life in provincial Russia—its tragedies, frustrations, and moments of humble beauty and inspiration. The twelve stories in this volume depict doctors, actors, screenwriters, teachers, entrepreneurs, local political bosses, and common criminals whose paths intersect in unpredictable yet entirely natural ways: in sickrooms, classrooms, administrative offices and on trains and in planes. Their encounters lead to disasters, major and minor epiphanies, and—on occasion—the promise of redemption.

Maxim Osipov (b. 1963) is a Russian writer and cardiologist. In the early 1990s he was a research fellow at the University of California, San Francisco, before returning to Moscow, where he continued to practice medicine and also founded a publishing house that specialized in medical, musical, and theological texts. In 2005, while working at a local hospital in Tarusa, a small town ninety miles from Moscow, Osipov established a charitable foundation to ensure the hospital’s survival. Since 2007, he has published short stories, novellas, essays, and plays, and has won a number of literary prizes for his fiction. He has published five collections of prose, and his plays have been staged all across Russia. Osipov’s writings have been translated into more than a dozen languages. He lives in Tarusa.

What has been said of the work of Maxim Osipov

Masterful and often startling stories, suffused with an irony that is as merciless as it is tender.
—Daniel Medin

Maxim Osipov’s stories cut me to the quick, because he does what true writers do: he tries to make sense of life with his own mind, puts his soul into the effort, and, most importantly, presents everything in his own words.
—Sergey Gandlevsky

Osipov’s prose — remarkable, transparent, Russian, painful and tough, timely and timeless — is imbued with compassion. It may not always console, but it always gratifies.
—Lev Dodin

Osipov writes not only laconically, but simply, plainly, without going into excessive details but ‘going into’ the essence of contemporary Russian life. … Irony, Robert Musil once noted in his diaries, combines enmity with compassion. And this is what we find in the work of Maxim Osipov.
—Alexander Livergrant, Novy Mir