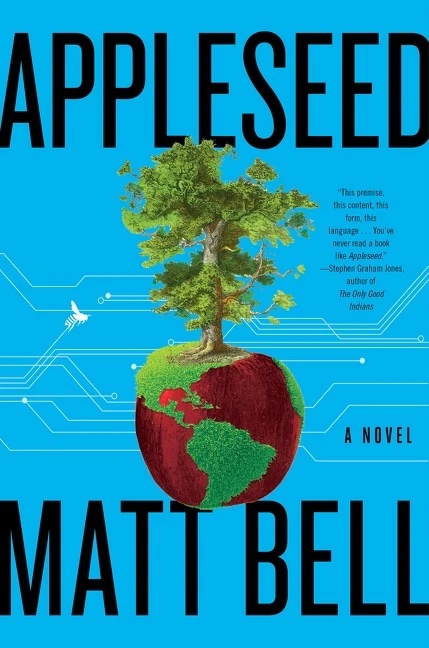 In eighteenth-century Ohio, two brothers travel into the wooded frontier, planting apple orchards from which they plan to profit in the years to come. As they remake the wilderness in their own image, planning for a future of settlement and civilization, the long-held bonds and secrets between the two will be tested, fractured and broken—and possibly healed.

Fifty years from now, in the second half of the twenty-first century, climate change has ravaged the Earth. Having invested early in genetic engineering and food science, one company now owns all the world’s resources. But a growing resistance is working to redistribute both land and power—and in a pivotal moment for the future of humanity, one of the company’s original founders will return to headquarters, intending to destroy what he helped build.

A thousand years in the future, North America is covered by a massive sheet of ice. One lonely sentient being inhabits a tech station on top of the glacier—and in a daring and seemingly impossible quest, sets out to follow a homing beacon across the continent in the hopes of discovering the last remnant of civilization.

Hugely ambitious in scope and theme, Appleseed is the breakout novel from a writer “as self-assured as he is audacious” (NPR) who “may well have invented the pulse-pounding novel of ideas” (Jess Walter). Part speculative epic, part tech thriller, part reinvented fairy tale, Appleseed is an unforgettable meditation on climate change; corporate, civic, and familial responsibility; manifest destiny; and the myths and legends that sustain us all.

Matt Bell is the author of the novels Scrapper and In the House upon the Dirt between the Lake and the Woods, as well as the short story collection A Tree or a Person or a Wall, a non-fiction book about the classic video game Baldur’s Gate II, and several other titles. His writing has appeared in The New York Times, Tin House, Conjunctions, Fairy Tale Review, American Short Fiction, and many other publications. A native of Michigan, he teaches creative writing at Arizona State University.

Cecil Castellucci is the award winning and New York Times Bestselling author of books and graphic novels for young adults including Shade, The Changing Girl, Boy Proof, The Plain Janes, Soupy Leaves Home, The Year of the Beasts, Tin Star, Female Furies and Odd Duck. In 2015 she co-authored Star Wars Moving Target: A Princess Leia Adventure. She is currently writing Batgirl for DC Comics. She was the lead singer in the Canadian indy pop quartet Nerdy Girl.

Brian Evenson is the author of over a dozen works of fiction. He has received three O. Henry Prizes for his fiction. The Song for the Unraveling of the World, won a Shirley Jackson Award and was a finalist for both the Los Angeles Times Ray Bradbury Prize for Science Fiction, Fantasy, and Speculative Fiction and the Balcones Fiction Prize. His most recent book is titled  The Glassy, Burning Floor of Hell. He lives in Los Angeles and teaches at CalArts.