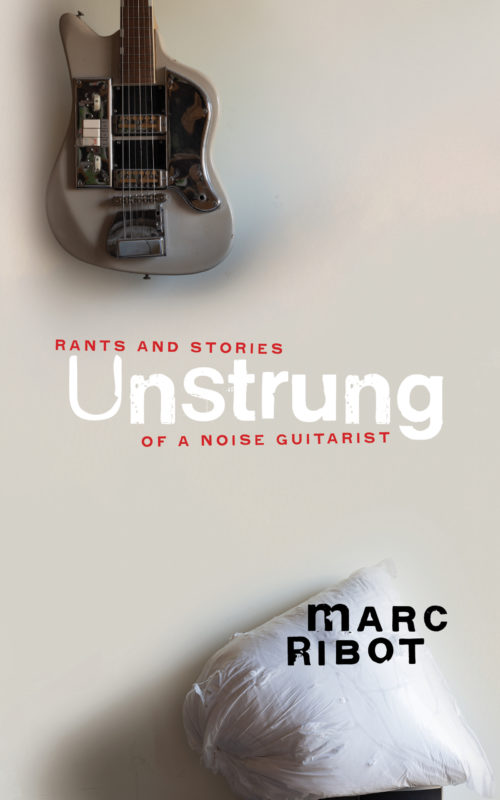 Unstrung: Rants and Stories of a Noise Guitarist

Throughout his genre-defying career as one of the most innovative musicians of our time, iconoclastic guitar player Marc Ribot has consistently defied expectation at every turn. Here, in his first collection of writing, we see that same uncompromising sensibility at work as he playfully interrogates our assumptions about music, life, and death. Through essays, short stories, and the occasional unfilmable film “mistreatment” that showcase the sheer range of his voice, Unstrung captures an artist whose versatility on the page rivals his dexterity onstage.

In the first section of the book, “Lies and Distortion,” Ribot turns his attention to his instrument—”my relation to the guitar is one of struggle; I’m constantly forcing it to be something else”—and reflects on his influences (and friends) like Robert Quine (The Voidoids) and producer Hal Willner (Saturday Night Live), while delivering an impassioned plea on behalf of artists’ rights. Elsewhere, we glimpse fragments of Ribot’s life as a traveling musician—he captures both the monotony of touring as well as small moments of beauty and despair on the road. In the heart of the collection, “Sorry, We’re Experiencing Technical Difficulties,” Ribot offers wickedly humorous short stories that synthesize the best elements of the Russian absurdist tradition with the imaginative heft of George Saunders. Taken together, these stories and essays cement Ribot’s position as one of the most dynamic and creative voices of our time.

Listen to an interview with Marc Ribot at The Quarantine Tapes (Literary Hub).

ELLIOTT SHARP is a contemporary classical composer, multi-instrumentalist, and performer. A central figure in the avant-garde and experimental music scene in New York City since the late 1970s, Sharp has released over eighty-five recordings ranging from contemporary classical, avant-garde, free improvisation, jazz, experimental, and orchestral music to noise, no wave, and electronic music. He is the author of the book IrRational Music published by Terra Nova Press.

What is being said about UNSTRUNG

“Unstrung has all the honesty, original angles, beauty, and clangor found in Marc Ribot’s playing. His compassionate writing about Frantz Casseus gives a human face to his calls for artists’ rights. Like life itself, this book is bloody, funny, and bloody funny.”
—Elvis Costello, musician

“An insightful tour through the razor-sharp mind of one of the world’s most original and influential guitar masters. Ribot’s acerbic wit, self-deprecating humor, and profoundly vexing love-hate relationship with all things guitar make for a fun and stimulating read.”
—John Zorn, musician

“Ribot writes with great care for words, for sounds . . . A good writer, like a good musician, and Ribot is both, needs to know what they’re composing to be able to understand it, maybe even do it better the next time. His stories are moving and compassionate . . . revelatory, honest, and insightful . . .”
—Lynne Tillman, from the Introduction

“In the beginning, we may have thought Marc Ribot was a full-time Lower East Side tenants rights activist who moonlit as an ubiquitous downtown noise guitarist. Now we come to find out he’s a phenomenal essay writer who has the nerve to be one of our loudest and most beloved electric jazz improvisers . . . [Ribot] composes essays about music and life of sublime wit, probity, and severe self-reckoning . . .”
—Greg Tate, author of Everything But the Burden: What White People Are Taking from Black Culture

“Don’t let the fact that I am calling Marc Ribot a thinking musician distract from the raw and the righteous aspects of his playing and of this book. You have to love something completely to want to look for a way out. Here is more proof of Marc’s love and understanding of music, of those who make it and of all the imaginings that it might jar loose!”
—Arto Lindsay, musician

“Marc Ribot, the thinking person’s roving guitar wrangler, always has something on his mind. It’s great to drift around in the woods and fields (and airports) behind the forehead of this man one’s known before mostly by the music he’s made. Take a ramble with Marc.”
Richard Hell, author of I Dreamed I Was a Very Clean Tramp