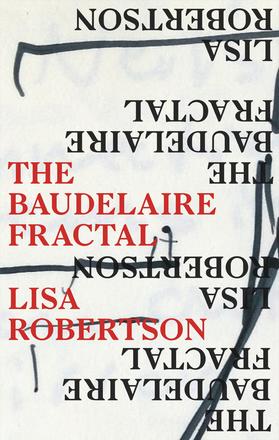 A debut novel by acclaimed poet Lisa Robertson, in which a poet realizes she has written the works of Baudelaire. One morning, the poet Hazel Brown wakes up in a strange hotel room to find that she’s written the complete works of Charles Baudelaire. Surprising as this may be, it’s no more surprising to Brown than the impossible journey she’s taken to become the writer that she is. Animated by the spirit of the poète maudit, she shuttles between London, Vancouver, Paris, and the French countryside, moving fluidly between the early 1980s and the present, from rented room to rented room, all the while considering such Baudelairian obsessions as modernity, poverty, and the perfect jacket. .. Part memoir, part magical realism, part hilarious trash-talking take on contemporary art and the poet’s life, The Baudelaire Fractal is the long-awaited debut novel by the inimitable Lisa Robertson.

Poet and essayist Lisa Robertson has held residencies at the California College of the Arts, Cambridge University; University of California, Berkeley; UC San Diego; and American University of Paris. Her books include Cinema of the Present, Debbie: An Epic (nominated for the Governor General’s Award in Canada), The Men, The Weather, R’s Boat (poetry) and Occasional Works and Seven Walks from the Office for Soft Architecture (essays). Lisa Robertson’s Magenta Soul Whip (Coach House) was named one of The New York Times 100 Notable Books of 2010, and was longlisted for the 2011 Warwick Prize for Writing. She currently lives in France.