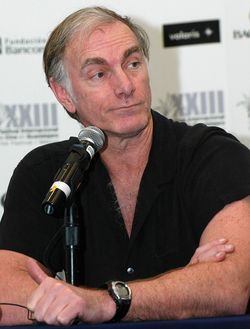 In Yellow Earth, the site of Three Nations reservations on the banks of the Missouri River in North Dakota, Sayles introduces us to Harleigh Killdeer, chairman of the Tribal Business Council. “An activist in his way, a product of the Casino Era,” Kildeer, who is contracted by oil firm Case and Crosby, spearheads the new Three Nations Petroleum Company.

What follows, with characteristic lyrical dexterity, insight, and wit, introduces us to a memorable cast of characters, weaving together narratives of competing worlds through masterful storytelling.

Set shortly before Standing Rock would become a symbol of historic proportions of the brutal confrontation between native resistance and the forces of big business and law enforcement, the fate of Yellow Earth serves as a parable for our times.

John Sayles works as a fiction writer, screenwriter, actor and feature film director.  His novel Union Dues (1978) was nominated for the National Book Award and the National Critics’ Circle Award.  He has written over a hundred screenplays and was twice nominated for the Academy Award for Best Original Screenplay.  He has directed 18 feature films, with another, I Passed This Way, currently in progress.  His films Matewan and Lone Star, as well as his previous novel A Moment in the Sun, are often used for instruction in History and American Studies courses.  Yellow Earth is his fifth novel.

What has been said about the work of John Sayles:

“John Sayles is a living master. Yellow Earth reminds me what novels are for.” —Jennifer Haigh, author of Heat and Light

Filmmaker Sayles … is also a highly imaginative short story writer with a sure ear for dialogue, a keen eye for group dynamics, a flair for quickly establishing intriguing mise-en-scènes, and the ability to animate a great spectrum of flinty characters … Sayles expresses his compassion and concern for those who struggle with poverty and prejudice, seeking both to provoke and entertain.” —Booklist
“Many writers can render credible characters in a credible world, but only a few can do so with a warmth and a humor that is as wise as it is true.” —Chicago Sun-Times
“[Sayles’s] ancestry is more like the reportorial vigor Jack London on one side and a little of the sweet impressionism of Stephen Crane on the other.” —The New York Times
“John Sayles is one of the most important public historians of our generation.” —William Cronon, President of the American Historical Association
“John Sayles is the very paradigm of the contemporary independent filmmaker. By raising much of the funding for his films himself, Sayles functions more independently than most directors, and he has used his freedom to write and produce films with a distinctive personal style and often clearly expressed political positions.From The Return of the Secaucus Seven to Sunshine State, his films have consistently expressed progressive political positions on issues including race, gender, sexuality, class, and disability.”  —University of Illinois Press
Sayles is a terrific writer. His breathtaking precision and attention to detail can make E.L. Doctorow’s historical novels look puny and slapdash by comparison. His ability to map the intersections of scores of plots and hundreds of fictional and real-life characters is truly stunning.”  —Adam Langer, San Francisco Chronicle