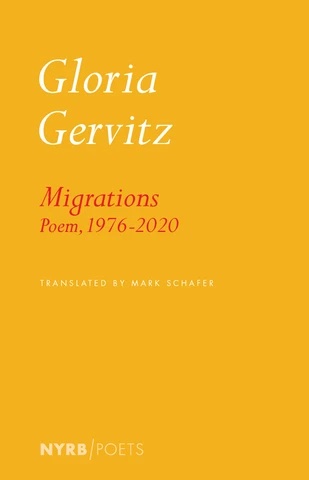 Forty-four years in the making, Migrations is considered by critics to be a masterpiece of modern Mexican literature. Gloria Gervitz’s book is an epic journey in free verse through the individual and collective memories of Jewish women emigrants from Eastern Europe, a conversation that ranges across two thousand years of poetry, a bridge that spans the oracles of ancient Greece and the markets of modern Mexico, a prayer that blends the Jewish and Catholic liturgies, a Mexican woman’s reclamation through poetry of her own voice and erotic power. In its reach, audacity, and astonishing vitality, Gervitz’s extraordinary life’s work bears comparison to the achievements of HD, Lorine Niedecker, Ezra Pound, and Walt Whitman.

Migrations presents the unmistakable, majestic voice of Gloria Gervitz, one of the most powerful and original voices of contemporary Jewish Latin American literature, in all its fullness, and Mark Schafer’s translation does it justice. Mystical, at times wrenching, it is a poem of ancestral as well as modern voices, a poem that should be read slowly as if reading a prayer. —Marjorie Agosín

Gloria Gervitz’s Migrations, co-written by death, co-written by eros, is one of the great poems of the twenty-first century. Mark Schafer, her extraordinary English-language translator, has managed to keep hold of this poem through all its bucking, its multiplying, its relentless champing at the bit. Gervitz is a wonder, true, but so is Schafer. —Forrest Gander

Gloria Gervitz was born in 1943 in Mexico City. In addition to writing Migrations, she has also translated the work of Clarice Lispector, Samuel Beckett, Anna Akhmatova, and other authors into Spanish. Her own work has appeared in a number of anthologies in Mexico and the United States and has been translated into several languages. In 2011, she was awarded the Mexico PEN Prize for Literary Excellence. She lives in California.

Mark Schafer is a visual artist and literary translator. His art has been exhibited across the United States, and he has translated poetry and prose by several Latin American authors, including David Huerta, Alberto Ruy Sánchez, Virgilio Piñera, and Antonio José Ponte. He lives in Cambridge, Massachusetts.