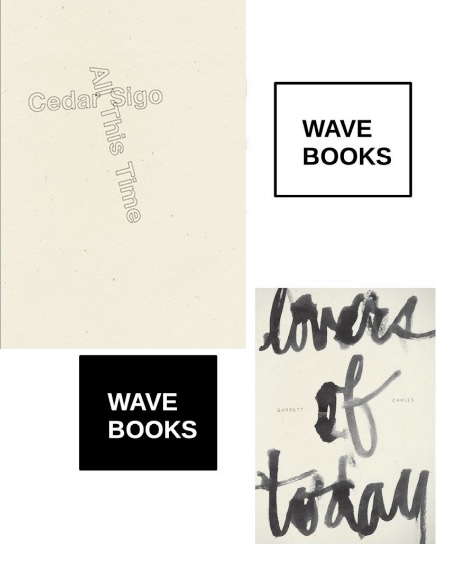 Cedar Sigo reading from All This Time


both books are published by Wave Books

about Lovers of Today

In Lovers of Today, Garrett Caples is his most playful and heartfelt. Here are poems that generously place the reader in a particular poetic moment that is both elegiac and also wildly entertaining. Taken from a bar of the same name in the Lower East Side in New York City, Lovers of Today is a collection of poetry that pays tribute to friendships including Kevin Killian, John Ashbery, Joanne Kyger, and Bill Berkson, among others, wherein each poem is a celebration of life’s ephemerality.

about All This Time

The newest collection from poet, editor, and Bagley Wright lecturer Cedar Sigo, All This Time, pays homage to artistic influences that have shaped his poetic practices. Lyrical and haunted, these poems call attention to the experience of living as an embodiment of art, reminding the reader that poetry is like an open-air structure; it is open to all who are curious enough to welcome everything in.

Garrett Caples is the author of three previous poetry books, Power Ballads (Wave Books, 2016), Complications (2007), and The Garrett Caples Reader (1999), a collection of outtakes, The Rise & Fall of Johnny Volume (2020), and a bilingual selection, Noches Apátridas (Unstated Nights, 2019). He’s also written a book of essays, Retrievals (2014), and a pamphlet, Quintessence of the Minor (2010). He’s the editor of Philip Lamantia’s Preserving Fire: Selected Prose (2018), Samuel Greenberg’s Poems from the Greenberg MSS (2019), and Michael McClure’s Mule Kick Blues and Last Poems (2021), as well as the co-editor of The Collected Poems of Philip Lamantia (2013), Particulars of Place (2015) by Richard O. Moore, Incidents of Travel in Poetry: New and Selected Poems (2016) by Frank Lima, and Arcana: A Stephen Jonas Reader (2019). He is an editor at City Lights Books, where he curates the Spotlight Poetry Series. He has a PhD in English from the University of California, Berkeley, and lives in San Francisco.

Cedar Sigo was raised on the Suquamish Reservation in the Pacific Northwest and studied at the Jack Kerouac School of Disembodied Poetics at the Naropa Institute. He is the author of eight books and pamphlets of poetry, including Language Arts (Wave Books, 2014), Stranger in Town (City Lights, 2010), Expensive Magic (House Press, 2008), and two editions of Selected Writings (Ugly Duckling Presse, 2003 and 2005). He has taught workshops at St. Mary’s College, Naropa University, and University Press Books. He is currently a mentor in the low residency MFA program at The Institute of American Indian Arts. He lives in Lofall, Washington.