Gabrielle Selz celebrating the launch of LIGHT ON FIRE: The Art and Life of Sam Francis 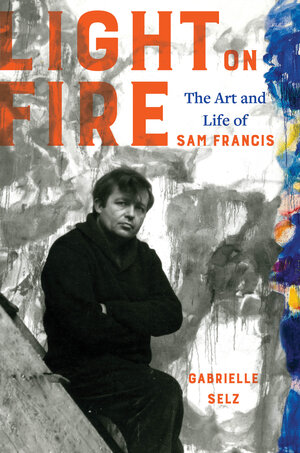 celebrating the launch for
Light on Fire: The Art and Life of Sam Francis
published by University of California Press

This is a live event taking place at the Emblem Hotel, 562 Sutter St, San Francisco, CA 94102 ( between Mason and Powell Streets)

Due to San Francisco Health Department guidelines we request that attendees present proof of Covid Vaccination to attend. A copy of your vaccination card or photo on a smart phone will suffice.

A groundbreaking biography of Sam Francis, one of the celebrated artists of the 20th century and the American painter who brought the vocabulary of abstract expressionism to Paris. Drawing on exclusive interviews and private correspondence, Gabrielle Selz traces the extraordinary life of this complex and charismatic artist who first learned to paint as a former air-corps pilot encased for three years in a full-body cast. While still a young man, Francis saw his color-saturated paintings fetched the highest prices of any living artist. His restless desire resulted in five marriages and homes on three continents. His entrepreneurial spirit led to founding a museum, a publishing company, a reforestation program, and several non-profits. With settings from World War II San Francisco to post-war Paris, New York, Tokyo, and Los Angeles, Selz writes an intimate portrait of a man who sought to resolve in art the contradictions he couldn’t resolve in life.

Gabrielle Selz is the award-winning author of, Unstill Life: A Daughter’s Memoir of Art and Love in the Age of Abstraction (W.W. Norton, 2014), which received the best memoir of the year award from the American Society of Journalists and Authors and was listed as a best book of 2014 by the San Francisco Chronicle. She has contributed to The New Yorker, The New York Times, the Los Angeles Times, More Magazine, and The Rumpus, among other publications. Her fiction has appeared in Fiction Magazine and her art criticism in Art Papers, Hyperallergic, Art & Object, and Newsday. She is a recipient of the New York Foundation for the Arts Fellowship in Nonfiction and is a Moth Story Slam Winner. Gabrielle Selz teaches Creative Non-Fiction and was the Distinguished Visiting Professor of Creative Writing at Saint Mary’s College of California. She makes her home in Oakland, California.

Patricia Albers is the author of Joan Mitchell, Lady Painter: A Life (Knopf), the first biography of the Abstract Expressionist painter. Albers’s previous book, Shadows, Fire, Snow: The Life of Tina Modotti, earned a starred review in Publishers Weekly and was named a Best Book of 1999 by the Library Journal. She also published Tina Modotti and the Mexican Renaissance, the catalog for the exhibition of Modotti’s photographs that she co-curated for Stockholm’s Moderna Museet and the Arles Photography Festival. Albers lives in the San Francisco Bay Area.

Praise for Light on Fire

“I think of Sam as a modern-day Nijinksy with a big loaded brush. He would get on to a canvas and really clean house. Selz’s book captures his spirit.” — Ed Ruscha, artist

“Drawing on her wide-ranging research, insightful observations, and lucid prose, Selz illuminates the feverish life of a survivor, art world misfit, and master of color and light. Her book offers new insights into the origins of Sam Francis’s dazzling art. It’s a page-turner and a revelation.”—Patricia Albers, author of Joan Mitchell, Lady Painter: A Life

“Gabrielle Selz’s Light on Fire is a deeply researched and engaging biography of a 20th-century artist whose luminous paintings once commanded the highest prices in the world. With a personal life (he had five wives) as dramatic as the oversized abstract images he exhibited around the globe, Sam Francis redefined what it meant to be an artist in the post-World War II era. Selz’s riveting book should bring long-overdue attention to a man with enormous talent, appetites, and zest for life.”—Frances Dinkelspiel, author of Tangled Vines: Greed, Murder, Obsession and an Arsonist in the Vineyards of California

“Sam Francis was an important and influential painter, which is enough, but his influence on art and the art world went far beyond his canvases. This richly written book understands that, and unfolds like an ideas-driven novel that brings verve and authority to its examination of Francis’s art and life.”—Tyler Green, author of Carleton Watkins: Making the West American

“A balanced, fascinating, and at times suspenseful account of a complicated man. Discreet and thoughtful, the author has nonetheless pulled back the curtain on this lion of the 20th century. I couldn’t put it down.”—Anastasia Aukeman, author of Welcome to Painterland: Bruce Conner and the Rat Bastard Protective Association

“A fascinating, meticulously researched account of an elusive and enthralling artist. A sheer delight to read.”—Julia Flynn Siler, bestselling author of The House of Mondavi, Lost Kingdom, and The White Devil’s Daughters