FROM HOWL TO NOW: BOOK BANS IN THE U.S. 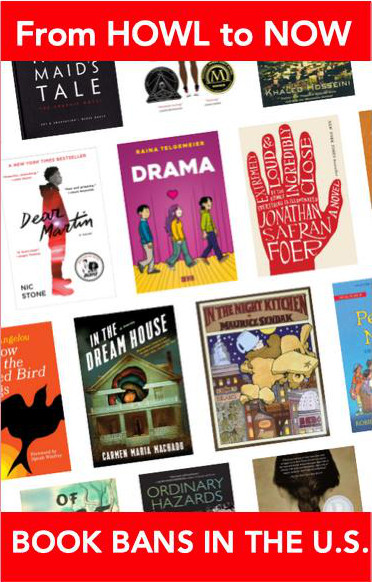 FROM HOWL TO NOW: BOOK BANS IN THE U.S.

During Banned Books Week, PEN America and Bay Area authors come together to discuss the alarming rise in book bans across the country. They share insights, observations, and methods to counter the suppression of books that address issues pertaining to race, gender, and sexuality. Ever timely, their conversation is a powerful call to action to stand up for the freedom to read.

Ipek S. Burnett, PhD, is the author of A Jungian Inquiry into the American Psyche: The Violence of Innocence and the editor of the upcoming volume Re-Visioning the American Psyche: Jungian, Archetypal, and Mythological Reflections. She is a contributing writer at CounterPunch and a Turkish novelist. She serves as the Co-Chair of Human Rights Watch Executive Committee in San Francisco.

Marcus Ewert is a writer, actor and director, living in San Francisco. His work has appeared in a number of anthologies and other publications including the 2004 Lambda Literary Award winning non-fiction anthology I Do/ I Don’t. His work has appeared in such literary journals as Shampoo, Suspect Thoughts, Star*line, and For Immediate Release. He was co-editor (with Mitchell Watkins) of Ruh Roh, an anthology of artists’ work that included pieces by Kathy Acker, Allen Ginsberg, Gregg Araki, Clive Barker, Sadie Benning, Dennis Cooper, Mike Diana, G.B. Jones, Paul McCarthy, Gus van Sant, and many others. His first book 10,000 Dresses, illustrated by Rex Ray, was published by Seven Stories Press in September 2008. 10,000 Dresses was recognized by the American Library Association on the 2009 Rainbow Book List, as a Stonewall Children’s and Young Adult Literature Honorbook, and a 2008 Lambda Literary Award Finalist.

Justin Hall is a cartoonist and the creator of the comics series Hard to Swallow (with Dave Davenport), True Travel Tales, and Glamazonia. He has stories in the Houghton Miflin Best American Comics, QU33R, Best Erotic Comics, and the SF Weekly, among others, and has exhibited his art in galleries and museums internationally. He edited the Lambda Literary Award-winning, Eisner-nominated No Straight Lines: Four Decades of Queer Comics, which he’s now producing as a feature-length documentary film. Most recently, he conceived and co-edited the anthology Theater of Terror: Revenge of the Queers. He curated the world’s first museum show of LGBTQ comics at the S.F. Cartoon Art Museum, as well as co-curated the largest such show at the Schwules Museum in Berlin.

Dr. Jewell Parker Rhodes is a bestselling and award-winning educator and writer for both youth and adults. She is the author of seven books for children including the New York Times bestsellers Ghost Boys and Black Brother, Black Brother. Rhodes is the Founding Artistic Director of the Virginia G. Piper Center for Creative Writing and Narrative Studies Professor and Virginia G. Piper Endowed Chair at Arizona State University. She has visited hundreds of schools across the country and is a regular speaker at colleges and conferences. The driving force behind all of her work is to inspire social justice, equity, and environmental stewardship.

Dashka Slater is an award-winning journalist who writes for such publications as The New York Times Magazine and Mother Jones, she is also the author of eleven books of fiction and non-fiction for children and adults. Her children’s picture books include Escargot, Dangerously Ever After, and The Antlered Ship, a Junior Library Guild selection and a Parents Choice Recommended book that received four starred reviews and was named Best Picture Book of the year by both Amazon and the Northern California Independent Bookseller’s Association. Her latest books are A Book for Escargot, a sequel to the popular picture book about a beautiful French snail, and The Book of Fatal Errors, a middle grade fantasy. She has received numerous honors for her work including the 2018 Stonewall Book Award from the American Library Association and the 2018 Beatty Award from the California Library Association amongst others.

Learn more about PEN America at this link: https://pen.org/banned-in-the-usa/

This event is made possible by support from the City Lights Foundation. Visit this link to learn more: https://citylights.com/foundation/

Julian Aguon in conversation with Rebecca Solnit celebrating the publication of No Country for Eight-Spot Butterflies: A Lyric Essay by Julian Aguon published by Astra Publishing A collection of essays […]

“The Waste Land” by T.S. Eliot, published in 1922, is widely regarded as one of the most influential, powerful— and at times  one of the most controversial—modernist poems of the […]

City Lights honors one of the most exciting new indy presses to emerge in the Bay Area in recent times. Nomadic Press publishes the works of emerging and established writers […]

City Lights celebrates the launch for the publication of Comrade Sisters: Women of the Black Panther Party Photographs by Stephen Shames , Text by Ericka Huggins published by ACC Art Books […]

Tayi Tibble in conversation with Tommy Orange (with an opening statement by John Freeman) City Lights celebrates the publication of Poukahangatus: poems By Tayi Tibble published by Alfred Knopf This […]

Ousmane K. Power-Greene reading from The Confessions of Matthew Strong: A Novel published by The Other Press A wildly original, incendiary story about race, redemption, the dangerous imbalances that continue […]