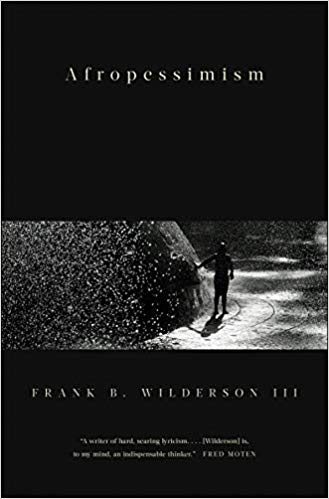 Frank Wilderson III discussing the subject of his new book

In the tradition of Edward Said’s Orientalism and Frantz Fanon’s Black Skin, White Masks, Afropessimism is an unparalleled account of the non-analogous experience of being Black.

A seminal work that strikingly combines groundbreaking philosophy with searing flights of memoir, Afropessimism presents the tenets of an increasingly influential intellectual movement that theorizes blackness through the lens of perpetual slavery. Rather than interpreting slavery through a Marxist framework of class oppression, Frank B. Wilderson III, “a truly indispensable thinker” (Fred Moten), demonstrates that the social construct of slavery, as seen through pervasive, anti-black subjugation and violence, is hardly a relic of the past but an almost necessary force in our civilization that flourishes today, and that Black struggles cannot be conflated with the experiences of any other oppressed group. In mellifluous prose, Wilderson juxtaposes his seemingly idyllic upbringing in halcyon midcentury Minneapolis with the harshness that he would later encounter, whether in radicalized, late-1960s Berkeley or in the slums of Soweto. Following in the rich literary tradition of works by DuBois, Malcolm X and Baldwin, Afropessimism reverberates with wisdom and painful clarity in the fractured world we inhabit.

Professor and chair of African American studies at the University of California, Irvine, and author of Incognegro: A Memoir of Exile and Apartheid, Frank B. Wilderson III has received an NEA Literature Fellowship and a Zora Neale Hurston/Richard Wright Legacy Award for Creative Nonfiction, among other awards.

What has been said about the work of Frank Wilderson III:

Frank Wilderson slings piercing stories and scalding analyses with literary fire and intellectual rigor. His tales juke genre and high-step over high-theory mumbo jumbo, and float Franz Fanon some new wings. Like Ralph Ellison’s bluesman, he peers unflinching into the abyss, testifies to its brutal histories and hopeless predicaments, ‘to finger its jagged grain, and to transcend it, not through the consolation of philosophy but by squeezing from it a near-tragic, near-comic lyricism.’ He ghostwrites our brutal pasts into present and still hopeless predicaments, yet divines deep love and blues humor. Even if our own hopes may live elsewhere, we cannot dismiss Afropessimism’s unnerving and undeniable truths, nor the timeless art of its author.

-Timothy B. Tyson, author of The Blood of Emmett Till

A writer of hard, searing lyricism…. [Wilderson] is, to my mind, an indispensible thinker.

-Fred Moten, author of The Undercommons