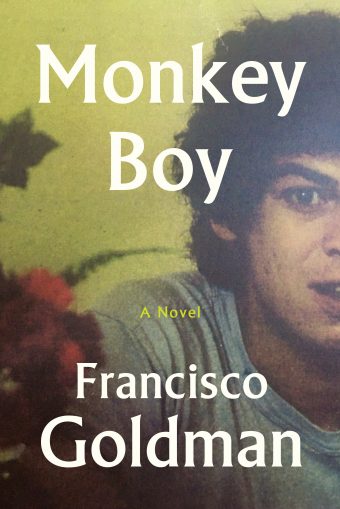 Goldman’s first novel since his widely acclaimed, national bestselling Say Her Name (winner of the Prix Femina Etranger), Monkey Boy is a sweeping story about the impact of divided identity – whether Jewish/Catholic, white/brown, native/expat – and one misfit’s quest to heal his damaged past and find love.

Our narrator, Francisco Goldberg, has been living and working in Mexico City as a journalist for over a decade, but has recently returned to New York City in hopes of “going home again.” It’s been five years since the end of his last relationship and he is falling in love again. Soon he is beckoned back to Boston by the high school girlfriend who was witness to his greatest youthful humiliations, and his mother, Yolanda, around whom his story orbits like a dark star. Backdropping this five day trip to his childhood home is the specter of Frank’s recently deceased father, Bert, an immigrant from Ukraine, volcanically tempered, pathologically abusive, yet also at times infuriatingly endearing; as well as the high school bullies who gave him the moniker “monkey boy” and his estranged, larger-than-life sister, Lexi.

Told in an open, irresistibly funny and passionate voice, this extraordinary portrait of growing up outside the dominant culture unearths the hidden cruelties in a predominantly white, working-class Boston suburb where Francisco – aka Paco, aka Frankie Gee – came of age. A crowning achievement from one of the most important American voices in the last 40 years.

Francisco Goldman has published four novels and two books of non-fiction.  The Long Night of White Chickens was awarded the American Academy’s Sue Kaufman Prize for First Fiction.  His novels have been finalists for several prizes, including, twice, The Pen/Faulkner Prize. The Ordinary Seaman was a finalist for The International IMPAC Dublin literary award.  The Divine Husband was a finalist for The Believer Book Award. The Art of Political Murder won The Index on Censorship T.R. Fyvel Book Award and The WOLA/Duke Human Rights Book Award.  The Interior Circuit: A Mexico City Chronicle, published in 2013, was named by the LA Times one of 10 best books of the year and received The Blue Metropolis “Premio Azul” 2017.  His most recent novel, Say Her Name, won the 2011 Prix Femina Etranger. His books have been published in 16 languages.

Valeria Luiselli was born in Mexico City and grew up in South Korea, South Africa and India. An acclaimed writer of both fiction and nonfiction, she is the author of the essay collection Sidewalks; the novels Faces in the Crowd and The Story of My Teeth; Tell Me How It Ends: An Essay in Forty Questions and Lost Children Archive. She is the recipient of a 2019 MacArthur Fellowship and the winner of two Los Angeles Times Book Prizes, The Carnegie Medal, an American Book Award,  and has been nominated for the National Book Critics Circle Award, the Kirkus Prize, and the Booker Prize. She has been a National Book Foundation “5 Under 35” honoree and the recipient of a Bearing Witness Fellowship from the Art for Justice Fund. Her work has appeared in The New York Times, Granta, and McSweeney’s, among other publications, and has been translated into more than twenty languages. She is a Writer in Residence at Bard College and lives in New York City.

“Francisco Goldman . . . Francisco Goldberg? . . . Frankie Gee!—crafter of the tenderest dirtiest love scenes!—the wisest and spookiest children!—the fathers whose monstrosity breaks our hearts with compassion for them—who else can do all this? Francisco Goldman is uncategorizable, as is this book which made me grow a second heart just to contain all its fierce tenderness. Goldman has been my literary hero from his first entrancing Long Night of White Chickens to this latest take-no-prisoners Monkey Boy. He is a true original, that rarest of writers, the kind we cannot live without.”—Susan Choi