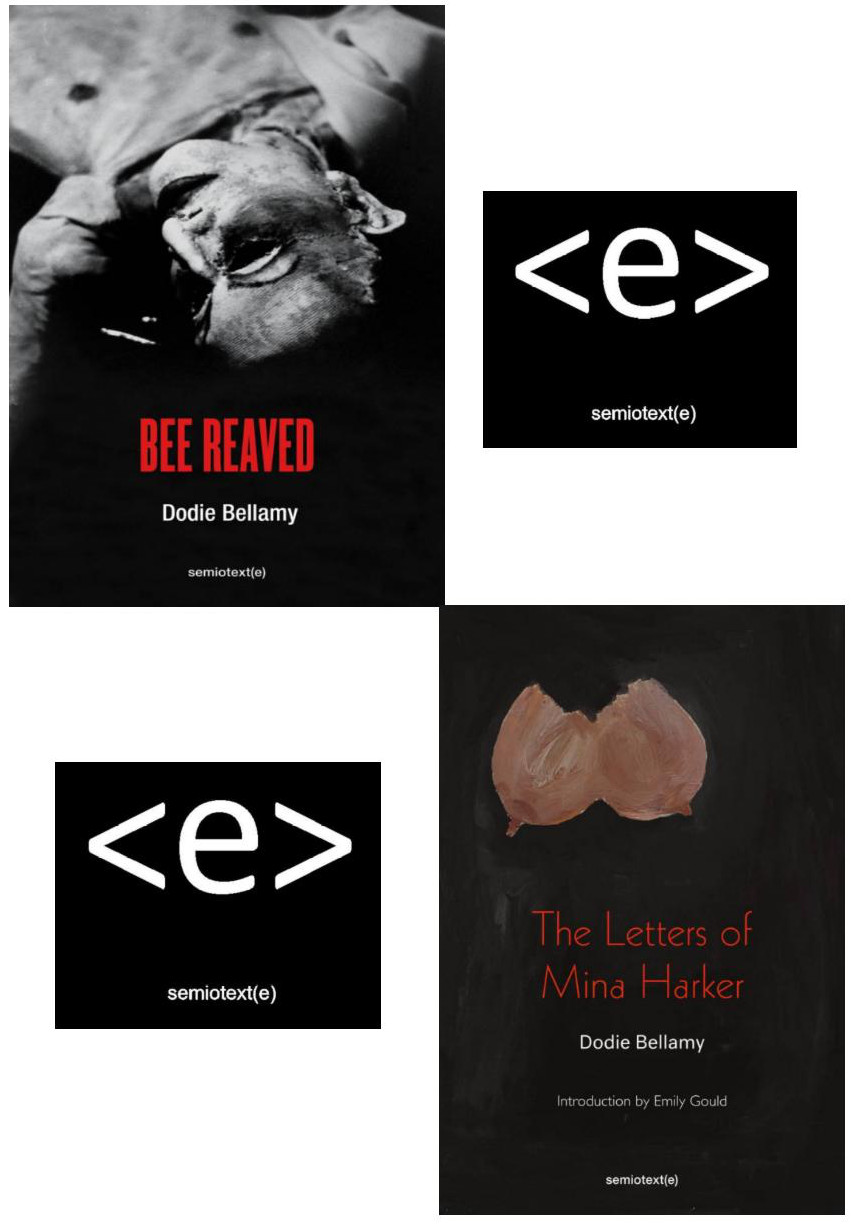 The Letters of Mina Harker
A long awaited reprint of Dodie Bellamy’s debut novel reviving a minor character from Bram Stoker’s Dracula and imagines her as an independent woman living in San Francisco during the 1980s.

So. Much. Information. When does one expand? Cut back? Stop researching? When is enough enough? Like Colette’s aging courtesan Lea in the Chéri books, I straddle two centuries that are drifting further and further apart.—Dodie Bellamy, “Hoarding as Ecriture”

This new collection of essays, selected by Dodie Bellamy after the death of Kevin Killian, her companion and husband of thirty-three years, circles around loss and abandonment large and small. Bellamy’s highly focused selection comprises pieces written over three decades, in which the themes consistent within her work emerge with new force and clarity: disenfranchisement, vulgarity, American working class life, aesthetic values, profound embarrassment. Bellamy writes with shocking, and often hilarious, candor about the experience of turning her literary archive over to the Beinecke Rare Book & Manuscript Library at Yale and about being targeted by an enraged online anti-capitalist stalker. Just as she did in her previous essay collection, When the Sick Rule the World, Bellamy examines aspects of contemporary life with deep intelligence, intimacy, ambivalence, and calm.

about The Letters of Mina Harker

Hypocrisy’s not the problem, I think, it’s allegory the breeding ground of paranoia. The act of reading into—how does one know when to stop? KK says that Dodie has the advantage because she’s physical and I’m “only psychic.” … The truth is: everyone is adopted. My true mother wore a turtleneck and a long braid down her back, drove a Karmann Ghia, drank Chianti in dark corners, fucked Gregroy Corso … —Dodie Bellamy, The Letters of Mina Harker

First published in 1998, Dodie Bellamy’s debut novel The Letters of Mina Harker sought to resuscitate the central female character from Bram Stoker’s Dracula and reimagine her as an independent woman living in San Francisco during the 1980s—a woman not unlike Dodie Bellamy. Harker confesses the most intimate details of her relationships with four different men in a series of letters. Vampirizing Mina Harker, Bellamy turns the novel into a laboratory: a series of attempted transmutations between the two women in which the real story occurs in the gaps and the slippages. Lampooning the intellectual theory-speak of that era, Bellamy’s narrator fights to inhabit her own sexuality despite feelings of vulnerability and destruction. Stylish but ruthlessly unpretentious, The Letters of Mina Harker was Bellamy’s first major claim to the literary space she would come to inhabit.

Dodie Bellamy’s writing focuses on sexuality, politics and narrative experimentation, challenging the distinctions between fiction, the essay and poetry. In 2018–19 she was the subject of On Our Mind, a yearlong series of public events, commissioned essays and reading group meetings organized by CCA Wattis ICA. With Kevin Killian, she coedited Writers Who Love Too Much: New Narrative 1977–1997. A compendium of essays on Bellamy’s work, Dodie Bellamy Is on Our Mind, was published in 2020 by Wattis ICA/Semiotext(e).

To learn more about Dodie Bellamy visit her website at:
https://www.belladodie.com/about

Chris Kraus is a filmmaker and the author of I Love Dick and Aliens & Anorexia, and coeditor of Hatred of Capitalism: A Semiotext(e) Reader. Index called her “one of the most subversive voices in American fiction.” Her work has been praised for its damning intelligence, vulnerability and dazzling speed.