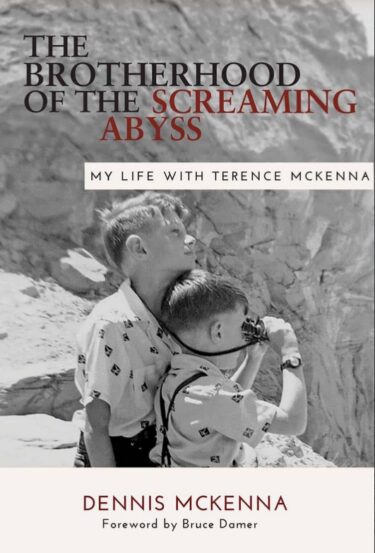 Join us in celebrating the launch of the second edition of ethnobotanist, author, and psychedelic advocate, Dennis McKenna’s

The Brotherhood of the Screaming Abyss: My Life with Terence Mckenna

Dennis will be joined in conversation by psychedelic investigator Mariavittoria Mangini, PhD, astrobiologist Bruce Damer, PhD, and anthropologist Luis Eduardo Luna. Moderated by Jasmine Virdi, this intimate dialogue will unravel stories of the McKenna brothers’ adventures into non-ordinary states of consciousness and beyond, reflecting upon how such explorations are interwoven with today’s rapidly growing psychedelic movement in the West.

The book presents an autobiographical account of renowned ethnobotanist Dennis McKenna. He shares his reflections on psychedelics, philosophy, scientific innovation and his relationship with his brother, Terence McKenna, one of the single-most influential people in modern psychedelic culture, known as the “Timothy Leary of the 90’s”.

Dennis McKenna is an American ethnopharmacologist, research pharmacognosist, lecturer, author and younger brother of Terence McKenna. Dennis McKenna’s professional and personal interests are focused on the interdisciplinary study of ethnopharmacology and natural hallucinogens. He received his doctorate in 1984 from the University of British Columbia, where his research focused on ethnopharmacological investigations of ayahuasca and oo-koo-he, two indigenous Amazonian psychedelic medicines. He completed postdoctoral studies at the Helicon Foundation in San Diego (1984-86), the Laboratory of Clinical Pharmacology at NIMH (1986-88) and the Department of Neurology at Stanford University (1988-1990). He worked at Shaman Pharmaceuticals as Director of Ethnopharmacology from 1990-93, and relocated to Minnesota in 1993 to join the Aveda Corporation as Senior Research Pharmacognosist.

Dr. McKenna taught courses in Ethnopharmacology, Botanical Medicines and Plants in Human Affairs in the Center for Spirituality and Healing at the University of Minnesota from 2001 to 2017. He is a founding board member of the Heffter Research Institute and serves on the advisory board of non-profit organizations in the fields of ethnobotany and botanical medicines. He was a key organizer and participant in the Hoasca Project, an international biomedical study of ayahuasca used as a sacrament by the UDV, a syncretic religious group in Brazil. From 2004 to 2008, he was the Principal Investigator on a project funded by the Stanley Medical Research Institute to investigate Amazonian ethnomedicines for the treatment of schizophrenia and cognitive deficits.

In 2017, with the collaboration of many colleagues, he organized and presented a landmark symposium, the Ethnopharmacologic Search for Psychoactive Drugs: 50 years of Research. The conference commemorated the 50th anniversary of the original conference held in San Francisco in 1967. Synergetic Press published a limited edition of the Proceedings of both the 1967 and 2017 symposia as a double volume set in 2018.

In the spring of 2019, in collaboration with colleagues in Canada and the U.S., he incorporated a new non-profit, the McKenna Academy of Natural Philosophy – A 21st Century Mystery School, www.mckenna.academy. He emigrated to Canada in the spring of 2019 together with his wife Sheila, and now resides in Abbotsford, B.C.

Mariavittoria Mangini, PhD, FNP has written extensively on the impact of psychedelic experiences in shaping the lives of her contemporaries, and has worked closely with many of the most distinguished investigators in this field. She is a founder of the Women’s Visionary Council, a nonprofit organization that supports investigations into non-ordinary forms of consciousness and organizes gatherings of researchers, healers, artists, and activists whose work explores these states. Her long history with the Haight Ashbury Free Clinic includes having been a barefoot patient, a lead clinician in the medical section, and the chair of the Board of Directors – all in the same lifetime. She has been a Family Nurse Midwife for 35 years, and was in primary care practice with Frank Lucido MD, one of the pioneers of the medical cannabis movement, for 25 years. Their practice was one of the first to implement the California Compassionate Use Act of 1996, the first state medical cannabis initiative. She is Professor Emerita of Nursing at Holy Names University in Oakland. Her current project is the development of a Thanatology program for the study of death and dying.

Luis Eduardo Luna has a PhD from the Department of Comparative Religion Stockholm University (1989) and was named 2002 Doctor of Humane Letters by St. Lawrence University, Canton, New York. He retired in 2011 from the Department of Modern Language and Communication at the Hanken School of Economics, Helsinki. He was an Assistant Professor in Anthropology (1994-1998) at the Department of Anthropology of Santa Catarina Federal University (UFSC) in Florianópolis, Brazil. Dr. Luna is the author of Vegetalismo: Shamanism among the Mestizo Population of the Peruvian Amazon (1986), a co-author with Pablo Amaringo of Ayahuasca Visions: The Religious Iconography of a Peruvian Shaman (1991), and co-author with Slawek Wojtowicz, Rick Strassman and Ede Frecska of Inner Paths to Outer Space: Journeys Through Psychedelics and Other Spiritual Technologies (2008). He is also a co-editor with Steven White of Ayahuasca Reader: Encounters with the Amazon’s Sacred Vine (2000, expanded second edition with Synergetic Press in 2016). Dr. Luna has been a curator of art exhibits in Europe, Latin America, and the United States. He is the Director of Wasiwaska, Research Center for the Study of Psychointegrator Plants, Visionary Art and Consciousness, Florianópolis, Brazil.

Bruce Damer, PhD, is Canadian-American multidisciplinary scientist, designer, and author. Dr. Damer collaborates with colleagues developing and testing a new model for the origin of life on Earth and in the design of spacecraft architectures to provide a viable path for expansion of human civilization beyond the Earth. He began his career in the 1980s developing some of the earliest user interfaces for personal computers, led a community in the 1990s bringing the first multi-user virtual worlds to the Internet, and since 2000 supported NASA and the space industry on numerous simulations and spacecraft designs. He has spent 25 years chronicling the history of computing in his DigiBarn Computer Museum and curates archives of counterculture figures such as Dr. Timothy Leary, Terence McKenna and others. He currently serves as Principal Scientist at DigitalSpace; Associate Researcher in the Department of Biomolecular Engineering at UC Santa Cruz; Associate of the NASA Astrobiology Center; Member of the International Society for the Study of the Origin of Life, and Founding Director of the Contact Consortium. He also served as Visiting Scholar at the University of Washington and as a member of the Faculty at Charles University, Prague. He received his PhD from University College, Dublin; MSEE from the University of Southern California and BSc from the University of Victoria.

Jasmine Virdi, MA, is a writer, educator, poet, and activist based in San Miguel de Allende, Mexico. Her work focuses on psychedelics, spirituality, and ecology and has been featured in DoubleBlind Magazine, Open Democracy, Psychedelics Today, Chacruna Institute for Psychedelic Plant Medicines, Psychedelic Press, and Lucid News. Jasmine is currently pursuing an MSc in Transpersonal Psychology and is in training to work as a psychedelic integration practitioner. Since 2018, she has collaborated with the independent publisher Synergetic Press, where her passions for ethnobotany, consciousness, and regeneration converge. Additionally, she volunteers for Fireside Project’s psychedelic peer-support line, aligned with their mission to provide compassionate, accessible, and culturally responsive support to all. Often breaking away into the wilderness, Jasmine can be found wherever there are birds singing.

Synergetic Press has for over 35 years been publishing unique and paradigm-shifting ideas in subjects such as ecology, sustainability, cultural anthropology, consciousness, and psychedelics that inspire both individual and social change. In the past decade, they’ve expanded their outreach beyond the book, hosting a number of symposiums and events both locally and internationally. By bringing together authors, readers, and experts within their fields, they’ve been able to cultivate a deeper interest in these topics within the community. To learn more visit: https://synergeticpress.com

This event was made possible by support from the City Lights Foundation. To learn more visit: https://citylights.com/foundation/