Cutting Up The Century: A Burroughs Birthday Miscellany 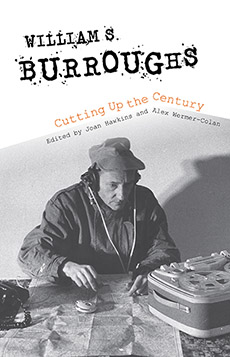 Cutting Up The Century: A Burroughs Birthday Miscellany with Joan Hawkins, Alex Wermer-Colan, Peter Hale, and Jon Longhi celebrating the release of

published by University of Indiana Press

William S. Burroughs Cutting Up the Century is the definitive book on Burroughs’ overarching cut-up project and its relevance to the American twentieth century. Burroughs’s Nova Trilogy (The Soft Machine, Nova Express, and The Ticket That Exploded) remains the best-known of his textual cut-up creations, but he committed more than a decade of his life to searching out multimedia for use in works of collage. By cutting up, folding in, and splicing together newspapers, magazines, letters, book reviews, classical literature, audio recordings, photographs, and films, Burroughs created an eclectic and wide-ranging countercultural archive. This collection includes previously unpublished work by Burroughs such as cut-ups of work written by his son, cut-ups of critical responses to his own work, collages on the Vietnam War and the Watergate scandal, excerpts from his dream journals, and some of the few diary entries that Burroughs wrote about his wife, Joan.

William S. Burroughs Cutting Up the Century also features original essays, interviews, and discussions by established Burroughs scholars, respected artists, and people who encountered Burroughs. The essays consider Burroughs from a range of starting points—literary studies, media studies, popular culture, gender studies, post-colonialism, history, and geography. Ultimately, the collection situates Burroughs as a central artist and thinker of his time and considers his insights on political and social problems that have become even more dire in ours.

Joan Hawkins is Associate Professor of Cinema and Media Studies in the Media School at Indiana University. She is author of Cutting Edge: Art-Horror and the Horrific Avant-garde and editor of the anthology Downtown Film and TV Culture, 1975-2001. She co-organized the Burroughs Century conference and symposium held at Indiana University Bloomington in 2014.

Alex Wermer-Colan is a Council of Library and Information Resources Postdoctoral Fellow at Temple Universitys Digital Scholarship Center. He researched and edited The Travel Agency is on Fire, a collection of unpublished archival materials, prose poems Burroughs produced by cutting up a range of canonical texts. Wermer-Colan was the organizer of the William S. Burroughs Centennial Conference held at the City University of New York in 2014.