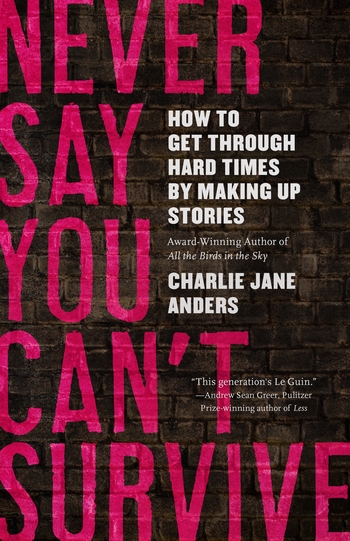 NEVER SAY YOU CAN’T SURVIVE: How To Get Through Hard Times By Making Up Stories

From Charlie Jane Anders, the award-winning author of novels such as All the Birds in the Sky and The City in the Middle of the Night, comes one of the most practical guides to storytelling that you will ever read.

Things are scary right now. We’re all being swept along by a tidal wave of history, and it’s easy to feel helpless. But we’re not helpless: we have minds, and imaginations, and the ability to visualize other worlds and valiant struggles. And writing can be an act of resistance that reminds us that other futures and other ways of living are possible.

Full of memoir, personal anecdote, and insight about how to flourish during the present emergency, Never Say You Can’t Survive is the perfect manual for creativity in unprecedented times.

The world is on fire.

So tell your story.

Charlie Jane Anders is the author of Victories Greater Than Death, the first book in the young-adult Unstoppable Trilogy, along with the short story collection Even Greater Mistakes. Her other books include The City in the Middle of the Night and All the Birds in the Sky. Her fiction and journalism have appeared in The New York Times, The Washington Post, Slate, McSweeney’s, Mother Jones, the Boston Review, Tor.com, Tin House, Conjunctions, Wired Magazine, and other places. Her TED Talk, “Go Ahead, Dream About the Future” got 700,000 views in its first week. With Annalee Newitz, she co-hosts the podcast Our Opinions Are Correct.

Kelly Link is the author of the collections Stranger Things Happen, Magic for Beginners, Pretty Monsters, and Get in Trouble. Her short stories have been published in The Magazine of Fantasy & Science Fiction, The Best American Short Stories, and Prize Stories: The O. Henry Awards. She is a 2018 MacArthur Fellow and has received a grant from the National Endowment for the Arts. She and Gavin J. Grant have co-edited a number of anthologies, including multiple volumes of The Year’s Best Fantasy and Horror and, for young adults, Steampunk! and Monstrous Affections. She is the co-founder of Small Beer Press and co-edits the occasional zine Lady Churchill’s Rosebud Wristlet.