Celebrating Ted Berrigan: Launch Party for “Get The Money!” 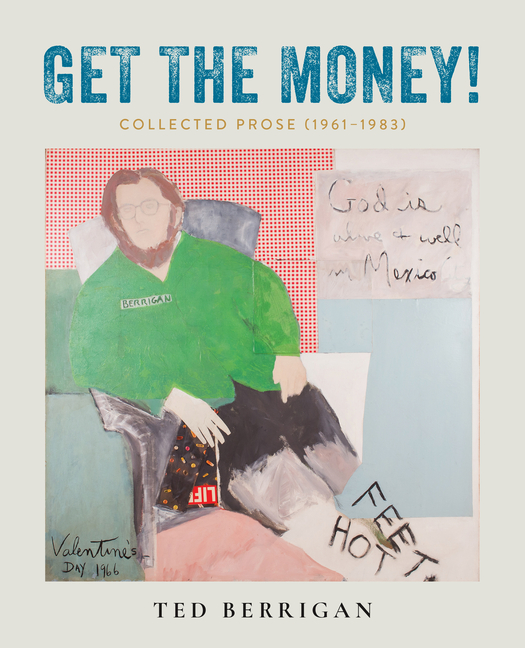 Join City Lights together with Edmund Berrigan, Anselm Berrigan, Alice Notley, and Nick Sturm in celebrating the publication of

“Get the Money!” was Ted Berrigan’s mantra for the paid writing gigs he took on in support of his career as a poet. This long-awaited collection of his essential prose draws upon the many essays, reviews, introductions, and other texts he produced for hire, as well as material from his journals, travelogues, and assorted, unclassifiable creative texts. Get the Money! documents Berrigan’s innovative poetics and techniques, as well as the creative milieu of poets–centered around New York’s Poetry Project–for whom he served as both nurturer and catalyst. Highlights include his journals from the ’60s, depicting his early poetic discoveries and bohemian activities in New York; the previously unpublished “Some Notes About ‘C, ‘” an account of his mimeo magazine that serves as a de facto memoir of the early days of the second-generation New York School; a moving and prescient obituary, “Frank O’Hara Dead at 40”; book “reviews” consisting of poems entirely collaged from lines in the book; art reviews of friends and collaborators like Joe Brainard, George Schneeman, and Jane Freilicher; and his notorious “Interviews” with John Cage and John Ashbery, both of which were completely fabricated. Get the Money! provides a view into the development of Berrigan’s aesthetics in real time, as he captures the heady excitement of the era and champions the poets and artists he loves.

Among the most significant American poets of the later 20th century, Ted Berrigan (1934–1983) was a leading force behind the second-generation New York School. Born in Providence, RI, Berrigan attended various local schools, then enlisted in the Army and was stationed in Korea in the aftermath of the Korean War. In the late ’50s on the G.I. Bill, he enrolled in the University of Tulsa in Oklahoma, where he earned a B.A. and M.A. During this period he met his younger poetic and artistic comrades Ron Padgett, Dick Gallup, and Joe Brainard, all four of whom moved to New York City. In the early ’60s, he was married to the poet Sandy Berrigan, with whom he had two children, David and Kate. He later married the poet Alice Notley and, after periods in Buffalo, Chicago, New York, Bolinas, London, and Essex, settled with her and their sons, Anselm and Edmund, in New York City, where they eventually all became fixtures of the scene around St. Mark’s Poetry Project. Berrigan published a magazine, C, in the 60s, and individual volumes by poets under the imprint C Press. His books of poetry include The Sonnets (1964, 1967, 1982, 2000), now published by Penguin, Collected Poems (2007) and Selected Poems (2011), both published by the University of California.

Praise for the work of Ted Berrigan

“Get the Money! captures the esprit de corps of the particular community close to Ted’s door on St Mark’s Place. This book of prose with its nimble lift, tinged with intimacy, wit, and perception is a welcome addition to the second generation NY School canon. Ted often went hungry but could make a few dollars with the short reviews. One walks the rounds with Ted on his ‘beat’: Love, poetry, gossip, art. Telling it like it is. Strolling into artist studios, galleries, poets’ modest digs, and into our hearts.”–Anne Waldman, author of Trickster Feminism

“Ted was my mentor, my teacher of America and its poetry, and I often quote him. He was an oral genius and I have regretted not writing down everything he said to me. Now I have this collection of journals, critical writing on art, aphorisms, and correspondence. It makes for a grand portrait of the poet who charmed my whole generation. Ted Berrigan is alive in this book in ways that no one could guess.”–Andrei Codrescu, author of Too Late for Nightmares

“It’s always a significant occasion when we have an edition of a poets prose. Get the Money! offers us an important window into Ted Berrigan’s laboratory, his no bullshit attitude, his class awareness, his gorgeous sentimentality, and his disarming anarchic humor. This book is what anyone could hope it would be: funny, tender, brilliant, intimate, original, alive.”–Peter Gizzi, author of Now It’s Dark

“Ted Berrigan’s voice has always been instantly familiar to me so Get the Money! feels less like a reading experience and more like taking a long walk with my favorite poet, then buying him a drink someplace and letting him talk. The pieces collected here offer a superhuman range of formal invention. … Berrigan’s prose is often loose and lyrical, hovering somewhere between blogging, letter writing, texting, and transcription. His deadpan bravura and sudden dismissiveness are consistently hilarious. Decades after his death Berrigan remains way ahead of his time. I think Robert Creeley said it best, ‘The Bell rings / Ted is ready’.”–Cedar Sigo, author of All This Time

“Ted Berrigan wrote wonderful poems and experimented brilliantly with various prose forms and strategies. Full of surprises, Get the Money! Collected Prose (1961-1983) will be indispensable to students of Berrigan and the New York School.”–David Lehman, series editor, The Best American Poetry

“What a gift to have “Get the Money – collected prose (1961-1983)” by Ted Berrigan, just new from City Lights Books. Here we have a large collection of Berrigan’s journals, reviews, essays, poems and more! What a pleasure to drop into the whirlwind of creative energy that is Ted’s language, Ted’s world, at the center of the New York City poetry and art worlds of the 1960s . Grab a pepsi, maybe some desoxyn, and enjoy the ride with Ted and his friends! Meet up with Frank O’Hara, John Ashbery, Ron Padgett, Joe Brainard, Bernadette Mayer, Alice Notley and many more – and remember, as Ted reminds us, “Don’t forget to love me.” With this book, we won’t forget.”–Gary Lawless, Owner, Gulf of Maine Bookstore