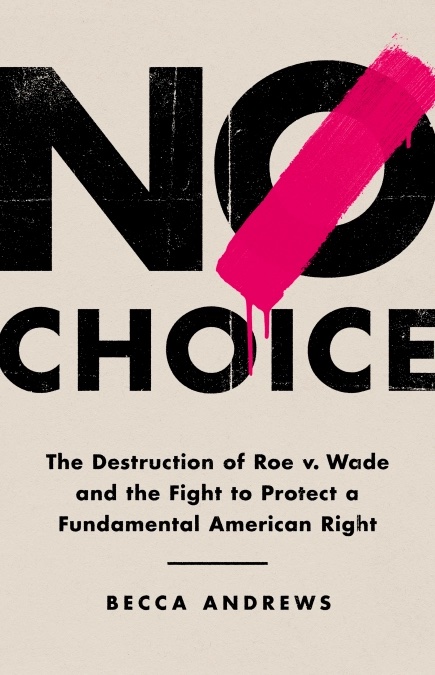 On the eve before the national elections, Mother Jones reporter Becca Andrews reviews the impact of the repeal of Roe v Wade and offers an up-to-date status.

No Choice: The Destruction of Roe v. Wade and the Fight to Protect a Fundamental American Right

An in-depth look at the legacy of Roe v. Wade, and on-the-ground reporting from the front lines of the battle to protect the right to choose.

The pieces started to fall In 2019 when a wave of anti-abortion laws went into effect. Georgia, Ohio, Mississippi, Louisiana and Kentucky banned abortion after six weeks of pregnancy, while Missouri banned the procedure at eight weeks. Alabama banned all abortions. The die was cast. And on June 24, 2022, the Supreme Court overturned Roe v. Wade and, abortion immediately became illegal in 22 states.

No Choice begins by shining a light on the eerie ways in which life before Roe will be mirrored in life after. The wealthy and privileged will still have access, low-income people will suffer disproportionately, and pregnancy will be heavily policed. Then, Andrews takes us to the states and communities that have been hardest-hit by the erosion of abortion rights in this country, and tells the stories of those who are most at risk from this devastating reversal of settled law. There is a glimmer of faint hope, though.

As the battle moves to state legislatures around the country, the book profiles the people who are doing groundbreaking, inspiring work to ensure safe, legal access to this fundamental part of health care.

Becca Andrews is a reporter at Mother Jones. A Southerner, she most often writes about the Southeast, gender, and culture. Before joining Mother Jones as an editorial fellow, she wrote for newspapers in Tennessee. Her work has also appeared in Slate, The New Republic, Wired, and Jezebel, among others. No Choice The Destruction of Roe v. Wade and the Fight to Protect a Fundamental American Right is her first book.

This event made possible by support from the City Light Foundation.