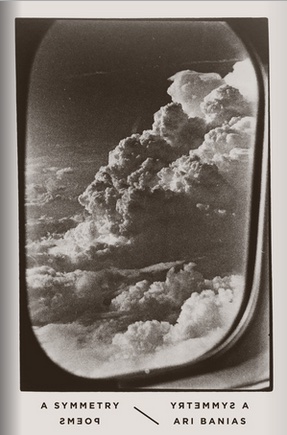 Ari Banias celebrates the launch of his new poetry collection
A Symmetry
published by W.W. Norton

Unsettling the myth of an ordered reality through uncanny repetitions and elliptical inquiry, A Symmetry considers the inscriptions of nationhood, language, and ancestral memory. A window washer wields an impossibly long mop in the mirrored pane of a Greek government building; strangers mesmerize us while they fold sheets into perfect corners. “Artists who design border wall prototypes are artists / who say they ‘leave politics out of it.’” In meditative wanderings and compressed, enigmatic lyrics, Ari Banias probes the sometimes-touching, often-violent mundane to draw out the intimate, social proportions of our material world.

Ari Banias is also the author of Anybody (W.W. Norton, 2016), a finalist for the Kate Tufts Discovery Award and the PEN Center USA Literary Award. His poems have appeared in American Poetry Review, bæst, Hyperallergic, Kenyon Review, The Nation, The New Republic, A Public Space, The Yale Review, and in numerous anthologies, including We Want It All: An Anthology of Radical Trans Poetics (Nightboat, 2020). His work has been supported by Headlands Center for the Arts, MacDowell, the New York Foundation for the Arts, the Fine Arts Work Center in Provincetown, the Wisconsin Institute for Creative Writing, and Stanford University’s Wallace Stegner program. He lives and teaches in the Bay Area. More information available at: http://aribanias.com/

Lara Mimosa Montes is a writer based in Minneapolis and New York. Her poems and essays have appeared in Academy of American Poets’ Poem-A-Day, BOMB, Boston Review, Hyperallergic, Jacket2, and elsewhere. She is a 2018 McKnight Writing Fellow and CantoMundo Fellow. She holds a PhD in English from The Graduate Center, City University of New York. Currently, she works as a senior editor of Triple Canopy. She was born in the Bronx.

Advance praise for A SYMMETRY

“If every book of poetry, from now until the end—or the terminal twisting—of time, were to offer itself as a field guide to the apocalypse by attrition in which we are living, in which we are forcing each other to live, then I would nominate Ari Banias’s A Symmetry to be among the books that we consult first. In its clear and capacious inventory of the inter- and codependence of what feels like the fullness and failing of all things, Banias’s poetry is transcribing a kind of vigilance that is mournful yet magnetizing, altruistic yet self-adhesive, and always enflowered by the daily uprising of new manifestations of love.” —Brandon Shimoda, author of The Grave on the Wall

“These poems are a talisman I want to wear around my neck, an eye that wards off evil by looking at what’s before it with unflinching commitment and devotion. Awake to possibility and care in the half-light of our belated era, they give this reader shelter from ‘the structures crumbling’ around us. Bursting with energy and attention and love — this book offers us the world.” —Eleni Sikelianos, author of Make Yourself Happy

“’Refuse the difference between sameness and difference.’ Refuse the possibility that saying it all on a song won’t change the baseline of what happened. Ari Banias’ poetry sits in an abandoned chair under the overpass, atop an ‘oil slick on the Aegean’ looking ‘at, not through’ reality’s immeasurables that the poet is called to count, holding it all in mind so we can also hold it. A T-shirt hanging out the window, ‘scratched glass Fanta bottles filled and refilled,’ ‘the ruined tanneries beside the seawall’—when you add everything up x times x, what do you get? Only the precarious balance of the world, and a trust in that voice of A Symmetry earned with each self-deflecting playful flourish. The paper antiquity of NYC coffee cups & ‘A doric column / squatting in a strip mall’ & ‘the discotheque / painted tourist pink with a classical name’ evoke the churn of some perpetual history whose action-reaction is embodied in the motion of lyrical meter and the news reports this book takes apart. The poet calls it: ‘A yellow butterfly that has no interest in me. / I have no interest in kings.’ Such cosmic foreshortening disembarrasses the poem from imperial valence until all that’s left of the book is ‘just the tree.’ When Ari Banias says ‘don’t be sorry for the future sand / this stone wall will become’ one can almost let it go. Almost.”
—Ana Božičević, author of JOMO

“The surge, the swell, and the casual mutability of the borders and breaks that ensconce our world are laid bare in A Symmetry, Ari Banias’s incandescent new collection of poems. Early on, these pieces acknowledge the transmutable, shifting world—acknowledge the indecency of anything that purports to be static and staid. Even the I is the I only as long as it resists all other possible orientations. Banias ingests the discrete, itinerant minutes, which makes his work come alive at the edges, the thresholds, and the charged moment where distance can finally collapse. The continuous jostling is generous, though. In it we remember the permutations that have existed, do exist, and that will exist in the future. Near the end of A Symmetry, Banias ropes “a brief fish / netted / partly recovered / the sweat of a horse / the wet of its eye.” These objects are momentarily linked and next time we see them, their potential will likely be revealed in an entirely new arrangement. This is one way to see—what taut instructions Banias has given us.”
—Asiya Wadud, author of No Knowledge Is Complete Until It Passes Through My Body