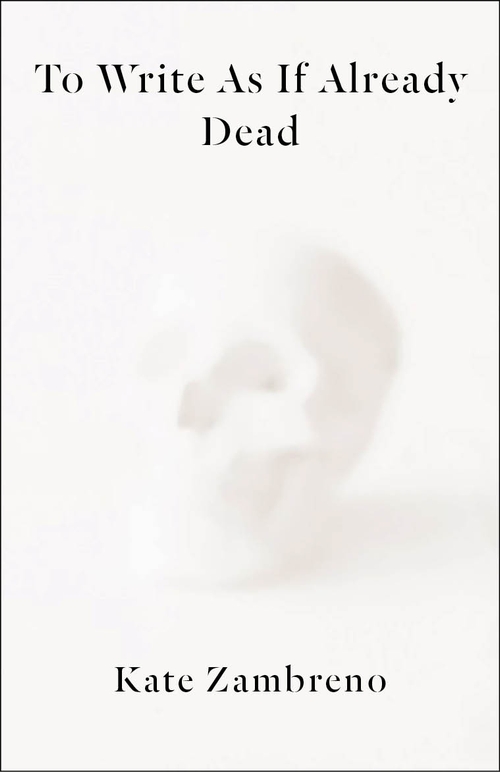 To Write as if Already Dead

To Write as if Already Dead circles around Kate Zambreno’s failed attempts to write a study of Hervé Guibert’s To the Friend Who Did Not Save My Life. In this diaristic, transgressive work, the first in a cycle written in the years preceding his death, Guibert documents with speed and intensity his diagnosis and disintegration from AIDS and elegizes a character based on Michel Foucault.

———–The first half of To Write as if Already Dead is a novella in the mode of a detective story, searching after the mysterious disappearance of an online friendship after an intense dialogue on anonymity, names, language, and connection. The second half, a notebook documenting the doubled history of two bodies amid another historical plague, continues the meditation on friendship, solitude, time, mortality, precarity, art, and literature.

Throughout this rigorous, mischievous, thrilling not-quite study, Guibert lingers as a ghost companion. Zambreno, who has been pushing the boundaries of literary form for a decade, investigates his methods by adopting them, offering a keen sense of the energy and confessional force of Guibert’s work, an ode to his slippery, scarcely classifiable genre. The book asks, as Foucault once did, “What is an author?” Zambreno infuses this question with new urgency, exploring it through the anxieties of the internet age, the ethics of friendship, and “the facts of the body”: illness, pregnancy, and death.

Kate Zambreno is the author of many acclaimed books, including Drifts (2020), Appendix Project (2019), Screen Tests (2019), Book of Mutter (2017), and Heroines (2012). Her writing has appeared in the Paris Review, Virginia Quarterly Review, and elsewhere. She teaches in the graduate nonfiction program at Columbia University and is the Strachan Donnelley Chair in Environmental Writing at Sarah Lawrence College.

T Fleischmann is the author of Time Is the Thing a Body Moves Through and Syzygy, Beauty.

PRAISE FOR TO WRITE AS IF ALREADY DEAD:
“Zambreno’s most urgent and charged work since Heroines.”

“Here, as ever, Zambreno proves herself a brilliantly generous and ambitious reader, one capable of engaging a text so acutely that the line between self and art blurs. To Write As If Already Dead is gossipy and smart, angry and agile, doubling and doubled—and a serious pleasure to read.”

“This book is a tour de force. I was completely awestruck by the way Zambreno enacts the concept of the title, and by the way she writes the body, hers and Guibert’s.”

“Kate Zambreno stylizes a thrilling form of reading as writing and writing as reading, one that speaks to the overlapping crises of our contemporary moment. No one thinks better and more carefully about the embodied practice of writing. She is the only person who could have written this book.”

—Amy Hollywood, author of Acute Melancholia and Other Essays

“Guibert’s voice is restored to the present through an act of transportation that left me slightly afraid of Zambreno’s power. But then that’s why you read her, and him: for a new awe of life.”
—Andrew Durbin, author of Skyland